Some areas could play at under 40 FPS while others play at over 100 FPS...

Agents of Mayhem released on Steam yesterday and since then we have been actively working on a PC performance review for the title, though after some extensive playtesting we have found the game's performance to be extremely inconsistent on PC.
To say the least PC players will have some difficulty playing this game at max settings, with our GTX 1080 Founders Edition failing to achieve a steady 60FPS at 1080p in several areas.
Agents of Mayhem has also proven very difficult to benchmark, especially when factoring in factors like time of day and the amount of time it takes to reach some of the game's more demanding areas.  Below we have included a graph that showcases the game's performance during the day and night in the game's overworld, offering a 40% performance differential. This should highlight how difficult this game can be to run, especially when battling enemies in broad daylight at street level. 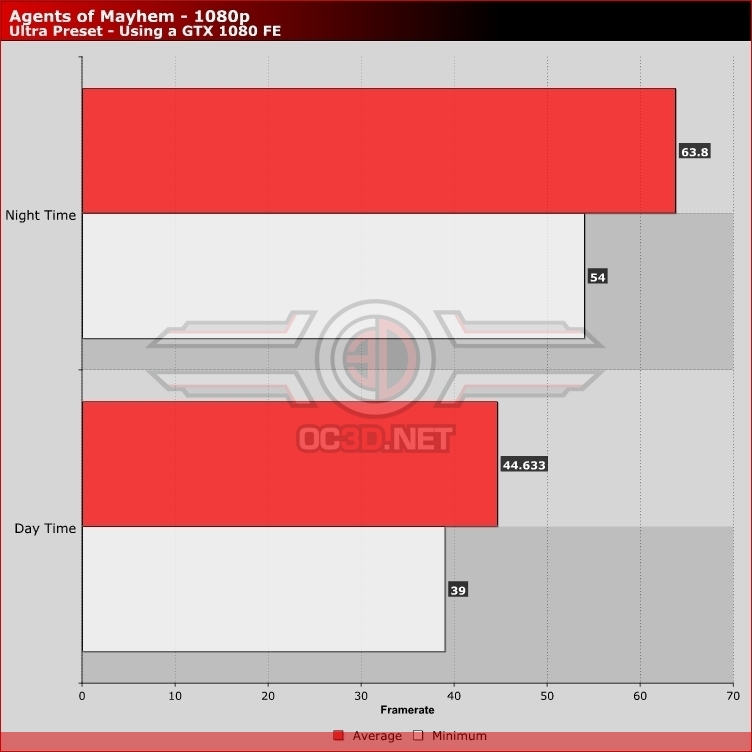 When entering buildings, or scaling to the top of tall buildings we continue to see Agents of Mayhem's performance change once again. This meant that when running at the top of skyscrapers we could easily achieve over 100FPS at 1080p Ultra settings while on ground level we could only achieve framerates in the mid-40's, again highlighting a huge performance difference between in-game locations.

We will continue to work on a more detailed performance analysis of Agents of Mayhem over the next few days, though for now, we can recommend that players lower the quality of Sun Shadows, God Rays, HBAO and General reflections to see a notable performance boost.

You can join the discussion on Agents of Mayhem's PC performance on the OC3D Forums.

TheF34RChannel
Quote:
Thanks for the heads-up! That's some sucky optimisation right there. I'll hold out until these issues are addressed because I'd like to (near) max those settings (bold quote).Quote

WYP
Quote:
We will have a more detailed rundown tomorrow. It has been tough going, as fixing the time of day for each test is a tricky process.

This one has been very time consuming to get right.Quote

TheF34RChannel
Quote:
Understandable and I would like to thank you for the enormous effort.

I hope they will overcome this with a patch.Quote
Reply