Is Zombies worth the extra money?

It is undeniable that Call of Duty: Black Ops 4 is popular, removing the series' single-player story mode to jump on the Battle Royale bandwaggon, successfully we should add. At launch, Black Ops 4 proved to be the most successful digital launch in the history of Xbox or PlayStation, easily outselling Call of Duty: WWII, the last entry in the series.

Activision has plans to increase the sales of Black Ops 4 further, releasing a cut-down "Battle Edition" of the game, targetting PC gamers with a lower price tag and access to the game's Multiplayer and Blackout (Battle Royale) game modes, leaving Zombies exclusive to the game's premium versions.

By default, Black Ops 4.s Battle Edition will ship for £34.99 in the UK, £15 less than the basic pricing of the "standard edition", though until January 7th the game will feature further discounts, making the Battle Edition £26.99 and the Standard Edition £39.99. Gamers who purchase the Battle Edition have the option to upgrade to the full game if they want to access Zombies mode.

At this time it is unknown whether or not the Battle Edition will be released on PS4 or Xbox One. 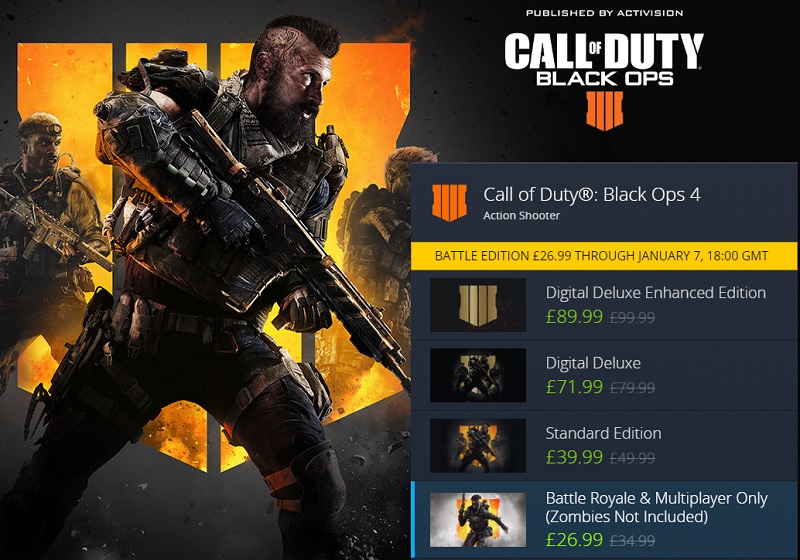 You can join the discussion on Black Ops 4's cheaper Zombies-free Battle Edition on the OC3D Forums.

Damien c
I don't play the Zombies, so it would have been worth the saving for me.Quote

NeverBackDown
Quote:
Same. I own the game since day 1 and haven't even entered the zombies lobby. From what I hear it's mehQuote

Damien c
Quote:
I tried it once and thought "NO" and have never been back to it.Quote

AlienALX
Yeah I can confirm it's rubbish. My step daughter used to play it and loved it so I gave it a try. It's literally like a map mod in L4D where you just keep fending off zombies, building barriers etc. Like, survival. Unfortunately if you have ever played a proper campaign in L4D then it's just awful.

I certainly wouldn't pay for it.Quote

Damien c
I use to enjoy the Zombie Mode in World At War and iirc Black Op's because you use to be able to turn stuff on like Paintball Ammo and it just made, it more silly and fun.

Since COD games decided to get rid of the "Console" where you could type stuff in, the Zombies aspect for me has gone downhill.Quote
Reply