This is the EU's largest fine to date

The European Commission has issued Google a record-breaking fine of €4.34 billion after the company was found to breach the EU's anti-trust rules, finding that the company has "imposed illegal restrictions" on Android device manufacturers and mobile operators to gain an unfair advantage over their competition in other markets.

The EU has given Google 90 days to end their infringing practices or face further penalties, which could be up to 5% of the average daily turnover of Alphabet, Google's parent company.

Google was found to have conducted illegal activities in three areas. Most of these infringements involve the forced bundling Google Search Engine or Chrome applications alongside their Android operating systems.

The first of these infringements is requiring manufacturers to include several Google apps (Chrome, Gmail, etc) alongside the Google Play Store, second, blocking device makers from releasing products with forked versions of Android and, finally, by making payments to phone manufacturers and telecommunications companies to exclusively bundle the Google Search app on their devices.

While Android remains a vibrant ecosystem with a range of devices at low-high pricepoints, Google's behaviour has prevented competitors from competing with Google in other areas, allowing Google to remain as a dominant search engine, and email provider thanks to their influence on Android. 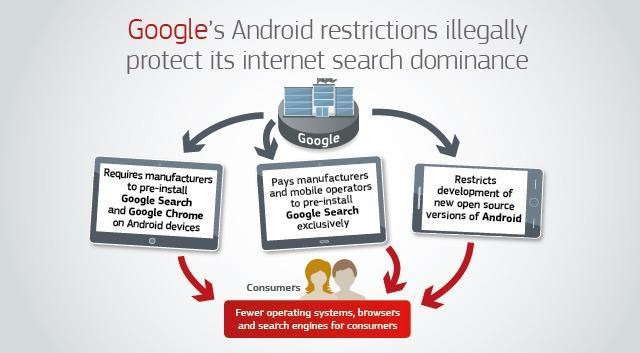 Google has pledged to appeal this decision, saying that " Android has created more choice for everyone, not less. A vibrant ecosystem, rapid innovation and lower prices are classic hallmarks of robust competition" in a statement to Reuters.

This news comes little over a year after Google was hit with a €2.42 billion EU fine over their anti-competitive use of their shopping comparison services.

You can join the discussion on the European commission hitting Google with a €4.34 billion fine on the OC3D Forums.