Is your PC ready for Halo Reach at 4K?

Microsoft has officially released the PC system requirements for Halo Reach's upcoming PC version, revealing how powerful your gaming hardware need to be to run Halo at average framerates of around 60FPS.

As you can imagine, given Halo Reach's origins as an Xbox 360 title, Halo: Reach's PC system requirements are very modest by today's standards, with 4K gameplay being a possibility on graphics cards like AMD's Radeon RX 480.

At this time, we do not know why the Windows Store's specifications will be different than what we see on Steam. At this time Halo Reach has no firm release date on PC.

On PC, Halo Reach will support separate Field of View options for Vehicles and First-Person viewpoints and offer players support for Resolution Scale options and multiple aspect ratios. This should allow PC gamers with 1080p monitor to downsample Halo Reach from higher resolutions if their hardware is up to the task. This is great news for PC gamers with high-end GPUs in their systems. 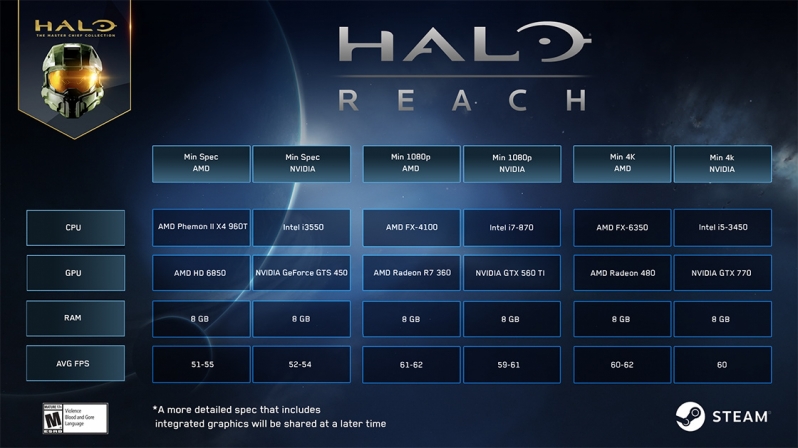 
You can join the discussion on Halo Reach's PC version on the OC3D Forums.

Giggyolly
That is super reasonable to run. My monitor is going to feel pretty silly being maxed out haha.Quote

AlienALX
Quote:
Or a Phenom 2 lol. It's like stepping back in time 7 years.

Deffo sounds like they're going for 4k 60 on the XB1.Quote

Damien c
I'm the insider preview of it, but due to being ill I cannot play it, I can just about look at my monitor but trying to play games is a no go.

I need to check the timetable for it, and hopefully it will still be playable in a couple of days.Quote
Reply