We need to talk about Corsair's SFX power supplies

There's a lot of false information going around. Let's set the record straight.

We need to talk about Corsair's SFX power supplies

As Corsair has stated on their forums, there have been "higher-than-normal RMA rates" for their SF series power supplies. That's a fact, and there's no denying that. Corsair has stepped up and has offered voluntary replacements for all potentially affected units, allowing users to replace their power supplies for free to give its userbase peace of mind.

What needs to be stressed here is that this isn't a recall. Units with affected batch numbers have been removed from sale, and the potential flaws within impacted units remain rare. Beyond that, the failure states of these units have little (practically zero) chance of damaging other system components, as this fault can only occur in the AC side of the power supply's transformer.

Arguably, Corsair is being overly cautious here, as their failure rates remain low, and the SF series' issues can only impact a minority of users within specific markets. The problem is that bad news travels fast, and it only takes a few negative user reviews to tarnish a brand's reputation.

Has Corsair reacted well to this situation?

While some will say that Corsair has been late to respond to this controversy, it must be remembered that the COVID-19 pandemic has impacted shipping, manufacturing and the way that people work across the world. It takes time to receive failed units from customers, to analyse the failure of these units and to diagnose what caused these faults.

As we have said before, the failure rate of Corsair's SF series remains low. There's a reason why it ships with a seven-year warranty. Corsair could have quietly removed the affected batch numbers from retailers and simply replace impacted units if they fail. Corsair didn't do that. If you have read Corsair's "SF Series Voluntary Product Replacement" post, you will know that Corsair has been incredibly transparent with its userbase. Corsair has discussed how their units have failed, why their units have failed and have offered replacements for all affected batch numbers, even for units which are currently fully functional.

Is my SF series PSU affected?

Only SF Series PSUs with lot codes 194448xx to 201148xx, which were manufactured between October 2019 and March 2020, are potentially affected. ll SF-series PSUs purchased before October 2019 are not affected. Lot codes for your PSU can be found on the packaging of your power supply.

We also have it on good authority that users outside of hot and humid climates will not need to worry about facing issues. European weather isn't enough to cause affected power supplies to fail, though Corsair is willing to replace affected batches if requested. 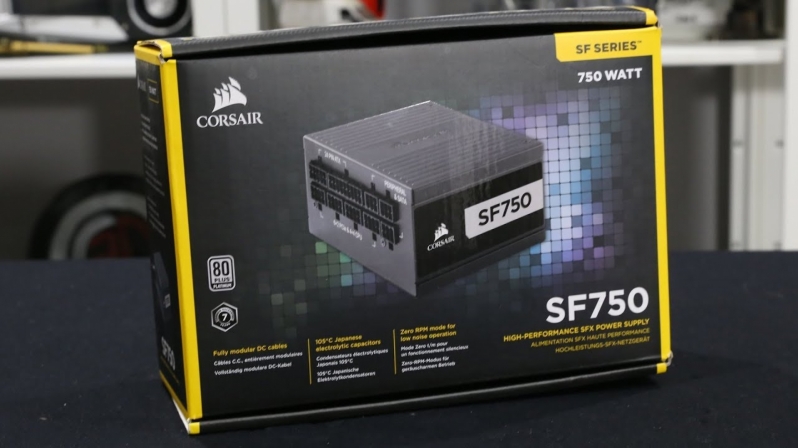 What's the problem? Why are some SF Series PSUs failing?

Based on what we can gather, the so-called "Corsair SF750 scandal" started in Singapore, where it came to light that some users had multiple SF750 power supplies fail within their systems. No other components were damaged due to these failures, and no danger was presented to the users involved.

After an in-depth investigation from Corsair's staff, as partially documented on the Linus Tech Tips forums and the Jonny GURU forums, it was uncovered that these failures were to impurities in the insulator pads that sit between the power supply's PFC diode and the power supply's heatsink. Beyond that, this failure state is only possible within humid, high-temperature markets. All this information is available online with a little Google searching. That's transparency!

Impure or sub-par materials is something that every manufacturer has to deal with at some point. Every once in a while, a company will make a bad batch of products, and that will cause issues when products reach consumers. These faults are is not due to bad design or sub-par manufacturing, but due to the errors of suppliers. In the case of the SF series, Corsair's issue only presented themselves when their power supplies were stored in hot and humid environments. Let's be clear; this failure isn't something which would present itself within industry-standard PSU burn-in testing. Sadly, this factor makes faults like this challenging to spot.

Most reported SF PSU failures are instantaneous, which means that the units fail as soon as they were turned on. This factor implies that affected power supplies were stored in a humid area before they were shipped to users, which is something that lies outside of Corsair's hands. You'd be surprised how many products failures are due to what we call "warehouse errors". We've heard of liquid coolers breaking because they were stored in warehouses at sub-0 temperatures, literally freezing the coolant inside, and situations where pallets of product are damage because of the errors of warehouse staff. This stuff happens, and the blame for this is often misplaced.

While this explanation will bring no comfort to those who have suffered product failures, but at least Corsair has promised replacement units and appear to be doing everything they can to address the issue.

Does the SF series have a design flaw?

The short answer is no, and the long answer is nooooooo. As we have mentioned above, the failure of some SF series power supplies is due to the combination of an impure material shipment and the sub-par storage conditions for retail units.

The design of the SF series is solid, and if it weren't, you would have heard of design flaw long before now. Remember that Corsair's SF750 released in January 2019, and the original SF600 and SF450 series units released in 2016. If there was a "design flaw" it would have come to light over long before now. Beyond that, failure reports are restricted to a limited number of batches from specific regions of the globe. If there were a design flaw, we would see more failures across the world.

Do we stand by our original Corsair SF Reviews?

Do we stand by our original Corsair SF750 review? Our answer is yes. Every company is affected by this kind of issue at some point. The mark of a good company is how they respond to these issues when they arise.

We feel bad for those who have been impacted by this issue, but Corsair's response had been as good as can be expected. All affected batches have been pulled from retailers, and all potentially affected units can be replaced at Corsair's expense. If you expected more, my question to you is what were you expecting?

When things like this happen, it is easy to jump on the anti-[insert brand name here] bandwagon. In this case, the anti-Corsair sentiment is mostly uncalled for. Corsair is living up to its promise of a 7-year warranty for its latest SF series units, and the company is going beyond its obligations to ensure that its users can use its SF series of power supplies with peace of mind. Corsair has reacted well to this situation, and they shouldn't be punished for that.

Corsair has not "recalled" its SF series of power supplies; this is a "voluntary product replacement". Remember that this fault isn't dangerous to users or their hardware. Corsair isn't hiding anything here, and their willingness to replace all potentially impacted units is a sign that the company really cares about its reputation. A lesser brand would have said nothing and quietly replaced failed units. That's not what happened here.

Those who wish to know more about Corsair's “SF Series voluntary product replacement" initiative should read about it on Corsair's forums.

You can join the discussion on Corsair's SF750 "voluntary product replacement" program on the OC3D Forums.

Bagpuss
If I was to build a SFF rig tomorrow, I'd still choose the Corsair SFX PSU.


I have many more things in my life to worry about than a PSU failing in climate conditions highly unlikely to ever affect someone using it in the UK.Quote

NeverBackDown
Didn't even hear about this. My SF600 has been running fine since installed. I'll check it's lot code but I'm not worried honestly.Quote

WYP
Quote:
The EU and US markets have nothing to worry about. Most failures are instantaneous and are restricted to specific humid markets.

Basically, a lot of the chat about this online is blown waaaay out of proportion.Quote

Kleptobot
Thanks for the info, i had seen some headlines but hadn't done any further reading before your article. Very informative.
Does corsair design/make their own PSUs or are they still slapping labels on seasonic designs?Quote

NeverBackDown
Quote:
Nothing to worry about but if it's from a bad batch no harm in asking for a new one if they are offering. If you lived in Florida or planned on moving there you would DEFINITELY be affected. It like walking in water down over yonder