Back in April of 2006 , Overclock3D embarked on it's first PSU review. Determined not to go down the "plug it in, take some readings" route, initial load testing was performed using a carefully selected assortment of high wattage lightbulbs to place heavy loads on the +12v rails. It soon became clear that this setup was far from idea with the fragility and heat of the bulbs posing serious safety issues along with a total inability to test the +3.3v and +5v rails or make small adjustments to the load settings.

This setup was quickly replaced by a series of power resistors capable of placing loads on each of the three main PSU rails (+3.3v, +5v & +12v) while also allowing load adjustments of around 5 amps on each of the rails simply by adding/removing resistors from the circuit. For almost two years this became our main testing platform with various improvements being made over time including the ability to place up to a 100 amp load across several rails along with loads of up to 40 amps on the +3.3v and 5v rails. The entire system was encased in a large steel box complete with high power fans and CPU heatsinks on each of the power resistors to help keep under control the 230°C temperatures that they could reach when not actively cooled.

Unfortunately (or maybe fortunately?) in July 2008 the cooling system in the load tester was accidentally switched off during the testing of a PSU and the entire system subsequently overheated and went 'BANG'. Since then we've avoided performing any PSU reviews (apart from the odd one or two performed at Enermax's old Milton Keynes offices) until we could obtain a professional ATE load tester that would help us take our PSU reviews to the next level. Today that very item arrived on our doorstep: 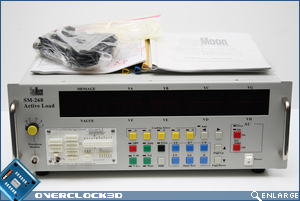 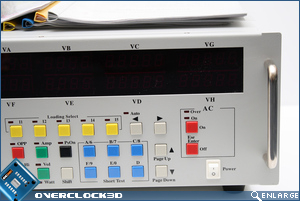 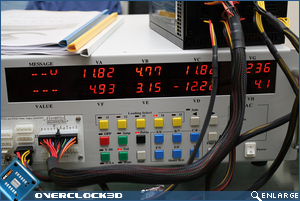 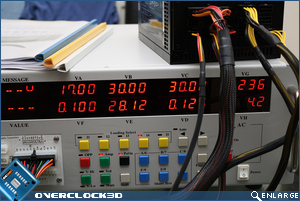 Seen above is our brand new SunMoon SM-268+ ATE load tester capable of placing a sustained load of 1690w across a total of six rails (including +5vsb and -12v) on any ATX PSU. Unlike our previous resistor based load tester the SM-268 gives us the ability to adjust amperage loads in increments as small as 0.01a while also measuring voltages and wattage readings on-screen. When connected to a PC the SM-268 has a full software suite that can effectively remote control the unit, making fully automated testing possible while also being able to output the test results to a printer.

Of course, having only spent one day with the SM-268 so far we're still really getting to grips with what it's capable of, and with an Oscilloscope on its way down to us too, it's certainly going to be a steep learning curve. However, over the next few weeks we will perfect and document our new PSU testing procedures and begin bringing some of the most accurate PSU reviews to your screens!

Discuss this article in our forums.
«Prev 1 Next»

Readers may not appreciate this, but it's a rare thing that a review website can do their own accurate, unbiased PSU reviews.

OC3D for the win

Lightnix
That is one rather mighty impressive piece of kit. I'll be eagarly awaiting any power supply reviews you have coming up.Quote

Freak
is that hand written on the bottom left?Quote

tinytomlogan
Thats well nice Jim, anyone whos anyone knew you were the psu daddy anyways.

This just put you in another league