In the current market, consumers are almost spoilt for choice when it comes to power supplies. For a product that provides power and offers very little in terms of getting more performance out of your system, it's quite amazing to see just how many options there are. Around five years ago, companies started manufacturing fully modular units which really turned heads and allowed for consumers and manufacturers to start thinking of ways to make even their power supplies and cables look good, rather than it just being the ugly black box in the bottom of the case. Certain companies have now fully done away with non-modular cables across all of their units, and the market is shaping up to be incredibly competitive in every price bracket. 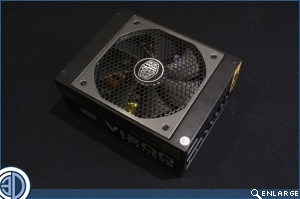 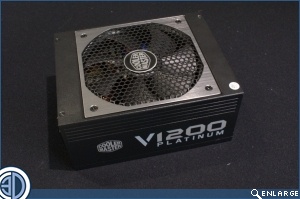 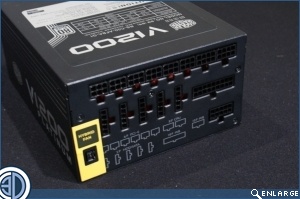 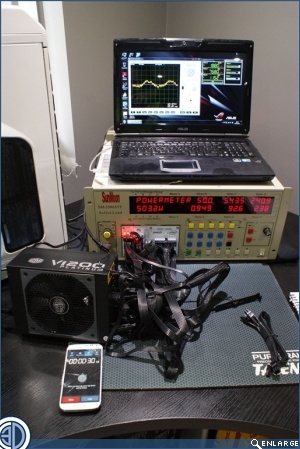 We've seen with a number of manufacturers recently that their highest end units have boasted some of the best efficiency ratings. The V1200 is no exception to this as it comes with an impressive 80 Plus Platinum rating. At 50% load, the V1200 promises up to 93% efficiency which may be ideal if you're running a folding or mining system, or if you spend a lot of time gaming as it will help to keep the overall running costs of the system down.

As we'd expect with a unit of this stature, the V1200 offers a fully modular cable design along with fully black cables. If you want a power supply of this capacity, the chances are you'll be running multiple graphics cards along with a few hard drives and other hardware. If this is the case, then modularity should be a must for you and it's good to see that CoolerMaster have you covered. It is also worth mentioning that the V1200 has options for powering up to six graphics cards with its twelve 6+2pin PCIE connectors. This could be a godsend for people running mining rigs with many graphics cards and may make for a great selling point for the V1200.

We have recently seen with other brands options for a silent fan mode. This means up to a certain load, the fan won't spin up at all, meaning you could potentially have a completely silent power supply even at relatively high loads. The V1200 offers this too along with a PCI bracket fan controller which allows you to alternate between the two modes (auto and hybrid). If you're running a mining system somewhere in the house where noise isn't an issue, then you'll most likely want the fan spinning all the time. However, of course if it's a gaming system, then you'll probably want some silence when completing normal day to day tasks on the computer, and so the silent mode would be preferable. We haven't seen the option for switching between the two modes with other units, and we do actually like it. Even if your mining system could run under a passive fan mode, if noise doesn't matter to you then it could be safer in the long run to always have it on, so it could be very helpful on a unit like this.

It's also worth mentioning the aesthetics for the V1200. The unit itself is entirely matte black with a simple logo on each side. The fan grill is brushed aluminium which does look really nice. The logos on each side of the unit are orientated in such a way that whichever way you mount your power supply, whether fan up or fan down, the logo will always be the correct way up. This is something we've seen Corsair do with their units, and it is great to see CoolerMaster following on.

As you'd expect with a quality unit like this, all the capacitors on board are high quality Japanese electrolytic and solid capacitors, meaning they should hold out far longer than a cheaper alternative. The unit itself is backed by a seven year warranty, which is great for peace of mind.

In our testing the fan remained completely passive on the hybrid mode even after 25 minutes of load at 500w which is pretty good in our eyes. Also, at 200w of load which is a rough estimate of a high end system's idle period, we saw around 90% efficiency which is very good at low loads such as that. When we increased to 500w load which is a reasonable estimate for a high end system whilst gaming, we saw efficiency peak at around 93% which is exactly what CoolerMaster claim the unit is capable of. When it comes down to voltage ripple, when we maxed out the unit, we saw 33mV of ripple. This is a pretty good score, and of course is well within ATX specifications, and also pretty heavily beats Corsair's RM1000. However, the Corsair AX1500 had a mere 9mV of ripple whilst pulling 1200w, and so it is clear that the V1200 just isn't able to compete with the top dog from Corsair at high loads.

We have to say we were expecting a little better in terms of ripple as CoolerMaster do claim the unit has highly advanced ripple suppression, and although the unit is still very good, it has been slightly let down in this aspect. The fan's options of auto and hybrid mode do make the product great whether you're using it for a gaming system or a folding/mining setup. Auto mode will maximise longevity especially in mining scenarios, and the hybrid mode means the fan will only spin when it really needs to if you're using this for gaming. We've decided to award the V1200 the OC3D Silver Award as it is a great all round unit, but it has been slightly let down by the ripple.

Thanks to CoolerMaster for providing the V1200 power supply. You can discuss your thoughts on the OC3D Forums.

WYP
93% efficiency, not even 3 years ago my PSU, which was a CoolerMaster, didn't even have bronze certification. +70% efficiency ftw.

Oh my things have progressed.Quote

MadShadow
Nice review, James. Not a product I would look for, but I definitely see a place for it in the market.Quote

tinytomlogan
Quote:
Its not enough for two 295X2's!Quote