ASUS' ROG Strix series of PSUs are due to release soon

ASUS' ROG Strix series of PSUs are due to release soon

Power supplies sit at the heart of any PC. They are what supply systems with their electrical lifeblood, making your choice in power supply one of the most important decisions any PC builder has to make.

ASUS' ROG sub-brand is relatively new to the power supply market, having created their high-end Thor series in 2018. Now, ASUS plans to enter the lower-end of the PSU market, revealing to the world their upcoming ROG Strix series of Gold rated power supplies. The ROG Strix 750W/650W Gold are both due to hit retail shelves within the next few weeks, marking availability in late August/Early September.

The ROG Strix series is designed to be more affordable than the ROG Thor, but no less reliable. ASUS' ROG Strix series of power supplies will come in 650W and 750W flavours and ship with a 10-year warranty, ensuring their users that these units a built to last. How many PC components do you keep for over a decade? My guess is not that many. Offering a 10-year warranty is a big deal, and in this regard, ASUS is matching the longest warranties that the consumer PSU industry offers.

Like the ROG Thor, ASUS' Strix series of power supplies will make use of ASUS' custom PSU heatsinks, which are designed to look good and provide cooling that's superior to many competing solutions. With the ROG Strix series, ASUS also plans to offer their users an optional 0dB fan mode, making their power supplies silent under low loads. In their marketing, ASUS says that these PSUs offer "Frozen Silence", stating that their units will be both cool and quiet. 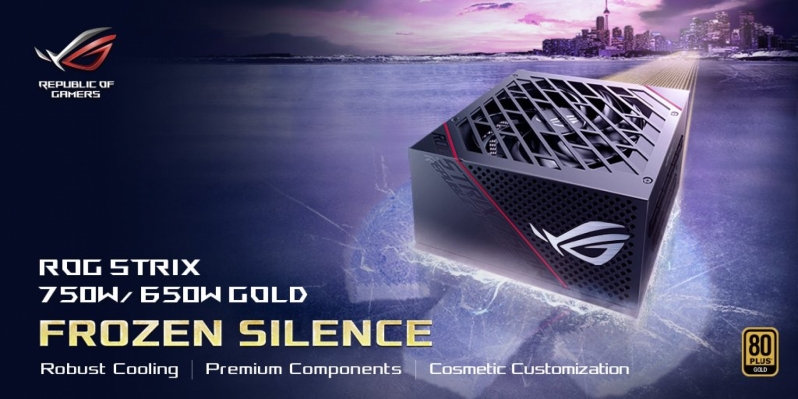 With the ROG Strix series of power supplies, ASUS plans to offer their users an unparalleled level of customisability, offering removable logo magnets to offer a range of coloured accent options. Want to go for a dark, stealthy look, or a more traditional ROG red colour scheme?

You can join the discussion on ASUS' ROG Strix series of power supplies on the OC3D Forums.

ImprovizoR
They're gonna charge an arm and a leg for cosmetic appeal, despite the fact that we're living in a PSU shroud era.Quote

Personally I never cared about cosmetic appeal for a PSU... It's a PSU!

MacLeod
Anybody else kinda bothered by brands trying to make everything?

Asus is my favorite motherboard and about my favorite GPU maker. Now they're making peripherals, monitors, laptops, smart phones for crying out loud and now PSU's. I'm not saying there is anything wrong with companies branching out trying to increase their market shares and their profits but I saw this a lot when I was big into car audio back in the early and mid 2000's... Brands that made superb amps started branching out into speakers, then subwoofers then RCA cables then head units.... Eventually instead of making superb amps, they just made "good" everything.

I'm probably overreacting but I guess I'm just worried that with Asus making top notch, bulletproof mobos and GPU's that if they start spreading themselves too thin, the products they were known for will start to degrade.Quote
Reply