We've seen both next-gen consoles, but how do their specs compare? PS5 VS Xbox Series X

Which console is stronger?

We've seen both next-gen consoles, but how do their specs compare? PS5 VS Xbox Series X

Both Sony and Microsoft have now revealed their next-generation games consoles, revealing system designs with remarkably different styles and internal hardware that seems extremely similar on the surface. The question now is this, which system is the most powerful?

Sony has already showcased some great looking games on PlayStation 5 (see their exclusives here), but team Xbox has Sony's console outpaced in many regards, while Sony holds a clear advantage in other areas. No matter what way you look at it, both systems offer a generational leap over what came before, both with regards to raw system performance and in terms of unique hardware features.

Both the Xbox Series X and PlayStation 5 will use customised Zen 2 series processors from AMD. Better still, both system makers have opted to deliver eight cores on their next-generation systems and clock speeds that exceed 3GHz. Note that the PlayStation 4's CPU is clocked at 1.6GHz, giving the PlayStation 5 a clock speed boost of over 2x over its last-gen counterpart.

These changes ensure that both systems will deliver insane increases to processing power over today's systems, thanks to improvements in both raw clock speeds and the amount of calculating power that can be pushed per clock cycle. This is an area where both the PlayStation 5 and Xbox Series X will deliver real generational leaps in system performance. The clock speed boost is huge, but both systems will achieve a lot more work from these clock cycles, giving them a larger boost than what the raw clock speeds imply.

Which system is more powerful?  Xbox Series X or PlayStation 5? In this case, the answer is simple, Microsoft's Xbox Series X is the victor. Microsoft offers higher clock speeds than Sony's theoretical maximum clock speed of 3.5GHz and does so without potential clock speed variations, making this a clear win for team Xbox.

When looking at the pure computational performance of these systems, Microsoft is the winner with 12 TFLOPS of guaranteed computational performance.  When compared to a theoretical maximum of 10.28 TFLOPS on the PlayStation 5, it is clear that the Xbox Series X has an advantage. While working with more compute units (Xbox Series X) is more complex than using fewer compute units with higher clock speeds (PlayStation 5), this is an issue that developers will be able to work around with relative ease.

With both the PlayStation 5 and Xbox Series X using the same AMD RDNA 2 graphics architecture, TFLOPS becomes a useful comparison point, and Xbox has more. The numbers don't lie. That said, it is possible that these consoles also contain unique graphical features in their customised RDNA 2 graphics chips. These custom features could help differentiate these consoles in time.

Memory-wise, both the PlayStation 5 and Xbox Series X use 16GB of GDDR6 memory at 14Gbps speeds. That said, this doesn't mean that both consoles will offer equal levels of memory performance.

Both Sony and Microsoft have opted to utilise NVMe SSD storage in their next-generation consoles, but in this regard, Sony is the clear winner in terms of raw performance. While Microsoft is using SSDs with 2.4GB/s raw data rates, Sony is steaming ahead with data rates of 5.5GB/s. That said, this approach is likely to make Sony's system a lot more expensive. No consumer PC SSDs currently offer this level of performance, making this cutting-edge storage technology something that's exclusive to Sony at the time of writing.

Multiplatform developers will create their games for the lowest common denominator, which means that games will be designed around the Xbox Series X's storage speeds. Sony's console may load games faster in some instances, but only exclusives will make full use of its potential.

The benefits of this fast storage is that data can be loaded into each console's memory much faster, allowing less memory on PS5 and Xbox Series X to be used as a cache for future frames. These fast storage solutions will enable both systems to make better use of their 16GB of system memory, enabling more complex scenes, higher texture resolutions and more.

Sony's method allows the company to better optimise its cooling solution for PlayStation 5, as their console design forces the system to consume a fixed amount of power and produce a fixed amount of heat. This should allow the PlayStation 5 to remain cool and quiet under gaming loads. The downside of this is that this design decision will allow the PlayStation 5's system clock speeds to vary, potentially lowering the console's performance if its workloads consume too much power. This could limit the console's potential in time.

With Xbox Series X, Microsoft promises a fixed level of performance. This consistency means that developers will know exactly what to expect from the system and that the console will always offer the same levels of processing power regardless of its current workload in-game. The downside of this is that some calculations consume more power than others, making some gaming workloads a lot more power-hungry than others. This variable heat production means that Microsoft will need to pack a stronger cooling unit and power supply into its system to keep the system running at these high loads and to keep the system cool and quiet.

Both designs have their merits, but Microsoft's design offers more consistency. That said, Sony's fixed-power method is extremely innovative and addresses a lot of problems that older consoles faced. These problems include overheating and the noise generated by overly loud cooling solutions. 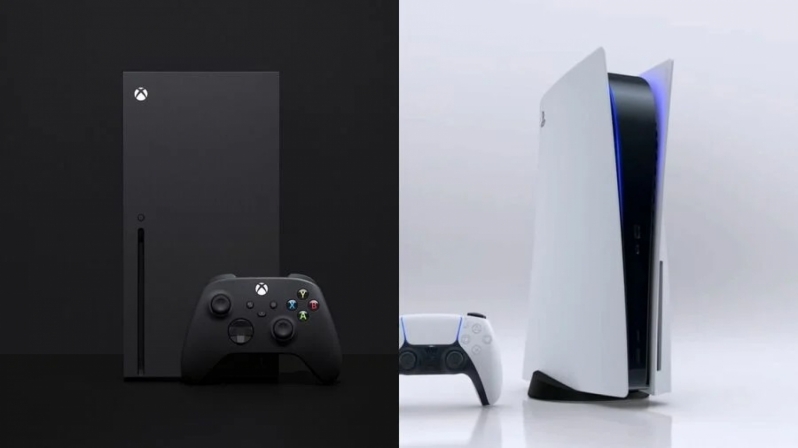 It's still all to play for

While Sony's PlayStation 5 is weaker than Microsoft's Xbox Series X in many aspects, the success of both console manufacturers will come down to factors outside of each system's pure performance numbers. Both consoles will need strong exclusives and other worthwhile content to be successful. The PS5 and Xbox Series X will also need to be easy to use and offer strong libraries of new and backwards-compatible content, as this would encourage their existing users to upgrade.

Right now, Sony is the winner when it comes to exclusive titles, with The Last of Us, Uncharted 4, God of War, Horizon: Zero Dawn and many others securing Sony a clear advantage over Microsoft this generation. That said, services like Xbox Game Pass promise gamers affordable access to a large number of old and new games at an affordable price. Beyond that, Microsoft has been working for several years to help them deliver a strong library of Xbox Exclusives that can rival Sony's offerings.

This is only the start of if the next console generation, but when it comes to hardware specifications, Microsoft has won on most counts. That said, Sony's stronger storage performance could deliver some exciting benefits in PlayStation 5's exclusive titles. Either way, both systems are a lot more powerful than what we have available today, which is great news for all gamers.

You can join the discussion on the PlayStation 5 and Xbox Series X on the OC3D Forums.

AngryGoldfish
They both look good, but I prefer the Xbox aesthetic.Quote

tgrech
Tbf I think they're close enough in specs that for the first time ever essentially multiplat games will probably look and play identically on both consoles. (To all but Digital Foundry esque frame by frame pixel counting analysis)Quote

Warchild
Since I have an Xbox 1X I may jump to the PS5 this gen. My last one was a ps3. I don't see me gaining a great advantage over the new XB that can merit the high cost.Quote

jcchg
Xbox Series X looks like a superb engineering masterpiece of heat dissipation and cooling. PlayStation 5 is a huge piece that looks like one of those postmodern buildings.Quote

tgrech
While I love the XSX's minimalism I do also really like the retrofuturistic styling on the PS5 ngl, looks like a model spaceship with the size, esp with the disk drive.

Either way, both are ridiculously better looking than their last gen launch counterparts the edgy slab and the VCR imo.Quote
Reply