A sit-stand desk with some RGB flash

The desk itself is more than large enough for most users, offering height adjustment option between 70cm and 110cm and a desk surface which is 80cm by 160cm. This desk uses a powerful motor to deliver sit/stand functionality, and users can use the desk's built-in controller to save four heights within the desk's memory.

We expect Thermaltake's TOughDesk 300 RGB Gaming Desk to become available at retailers soon, though at this time we do not have an MSRP price for the product.

Integrated into the ToughtDesk 300 is support for smart cable tidying features, which will allow users to tidy their cables into a cable management tray. This will help users to route and tie down their cables to fully support this desk's sit/stand functions. 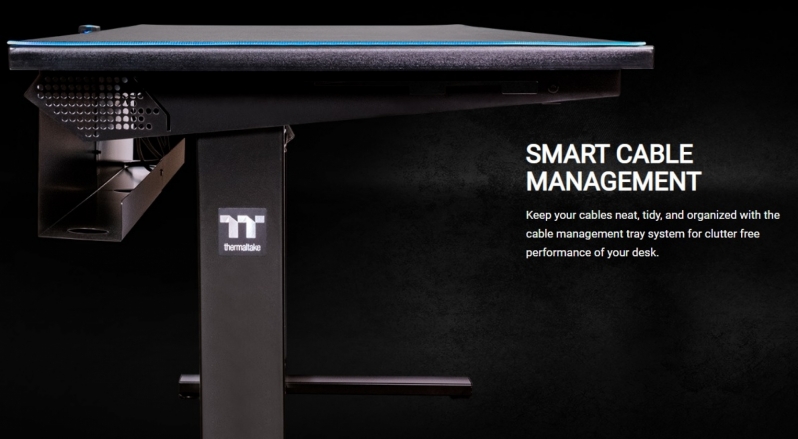 As we have mentioned before, we expect Thermaltake's ToughDesk 300 RGB Gaming Desk to become available at UK retailers within the coming weeks.

You can join the discussion on Thermaltake's ToughDesk 300 RGB Gaming Desk on the OC3D Forums.

Excalabur50
This is a link to how much it'll be here in Australia and it ain't cheap!
https://www.ple.com.au/Products/6417...on-Gaming-DeskQuote

Warchild
That is about the same mine is valued at, except I have an office variant without the RGB stuff.

Honestly working from home being able to stand and continue at my desk is fantastic. I don't see the value for gaming, but working wise it has meritsQuote

Warchild
Quote:
Would like to see that because I wouldnt mind getting a new one. Mine is getting worn out