The PC Gamer show is returning to E3 with Intel Sponsorship

The PC Gamer show is returning with Intel Sponsorship

The PC Gamer show is returning to E3 with Intel Sponsorship

The PC Gamer show is returning this year with Intel Sponsorship, making this the first year where the show has taken place without AMD's familiar logo.

This will be the 3rd year where PC gaming has had their own dedicated show at E3, with Intel, Bohemia Interactive, CyGames, Nexon and TripWire acting as sponsors. The event will be taking place on June 12th at 10 am PDT, which will be around 5 pm here in the UK.

PC Gamer presents the PC Gaming Show powered by Intel, the third annual event for PC gaming at E3, returns in 2017 as part of the official E3 conference schedule. With new headline sponsor Intel, the PC Gaming Show will take place live from The Theatre at Ace Hotel in Los Angeles on Monday, June 12 at 10am PDT. The event will showcase exclusive announcements, trailers and discussion from many of the most exciting developers and projects on the platform. Once again, proceedings will be hosted by PC fan-favorite, Sean “Day[9]” Plott. 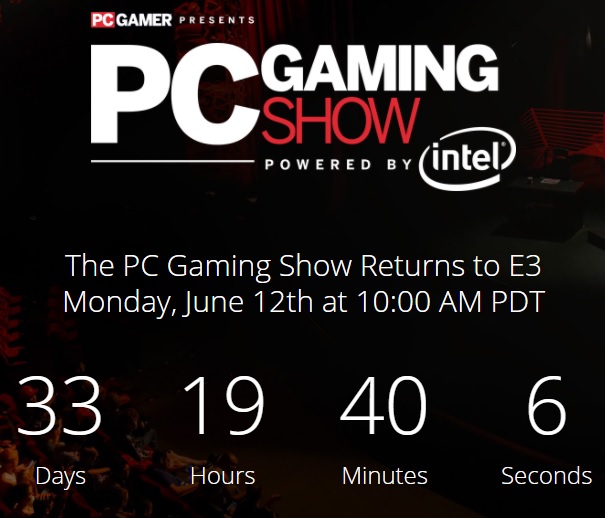 With the PC gaming show lacking AMD sponsorship, we can be sure that this event will not act as AMD's Vega launch event. This news also lines up with recent reports that Intel will be showcasing their new X299 socket and Skylake-X CPUs at and around E3, which before now was unprecedented.

It seems now that with competition from AMD's latest Ryzen CPUs, that Intel is now focusing on advertising themselves to gamers once again.

You can join the discussion on Intel becoming the main sponsor of E3's PC Gaming Show on the OC3D Forums.

TheF34RChannel
And it is there and then that Basin Falls and its CPUs will be announced... Interesting times ahead combined with AMDs upcoming Ryzen entries in the HEDT segment.Quote
Reply