Sony has released a new, revised version of their PlayStation console, one which is reportedly more lightweight than its predecessor and features a tool-free screw design for its stand, making the console more user-friendly.

Now, the exact changes within Sony's new revised CFI-1102A systems have been revealed, as Austin Evans, a popular YouTuber, has managed to acquire and tear down one of these new consoles.

As we predicted in our prior article on Sony's revised PlayStation system (link), the weight savings achieved by Sony's revised design come primarily from the system's revised heatsink design. Austin has confirmed that the system also contains minor internal PCB changes and alterations to the system's WiFi card and antennas. However, the bulk of the console's alterations concern its cooling.

Given that Sony's original PlayStation 5 console appears to run cooler than the system's newer models, Austin has suggested that Sony's older PlayStation 5 systems are the "better console". That said, both systems will perform identically in games. Sony will have tested these design changes and their impact before shipping their new PlayStation systems in high volumes, which means that users should not be concerned about the system's apparently reduced cooling potential. Sony will have tested these systems in-depth to avoid a potential "Red Ring of Death" failure scenario.

Essentially the updated PS5s that are rolling out right now are cheaper to produce with MUCH less cooling capability.

There are smaller internal changes with the Wi-Fi card and antennas but…as of right now the launch PS5 seems like the better console.

As we have suggested previously (link), this newly revised PlayStation console has launched shortly after Sony's declaration that their PlayStation 5 (disk) consoles are now profitable to produce and sell (link). This suggests that the PlayStation 5's newfound system-level profitability comes thanks to the console's new, cheaper to manufacture revision.

Sony's redesigned PlayStation console should be much cheaper to produce, and the system's new lightweight design should make shipping/distribution/logistics a lot easier for Sony. Sony is selling millions of PlayStation 5 consoles, and when products are being sold in such high volumes, a per-unit 300g mass reduction is a big deal.

It is not unusual for manufacturers to tweak the design of their systems over time, as parts often vary in price, and it is often cheaper to switch over to more affordable parts when replacements can be sourced. Sony's new CFI-1102A represent a more fundamental redesign of Sony's PlayStation 5 system, dramatically altering the system's cooling to make the system more cost-effective to produce.

You can join the discussion on Sony's revised PlayStation 5 consoles on the OC3D Forums. 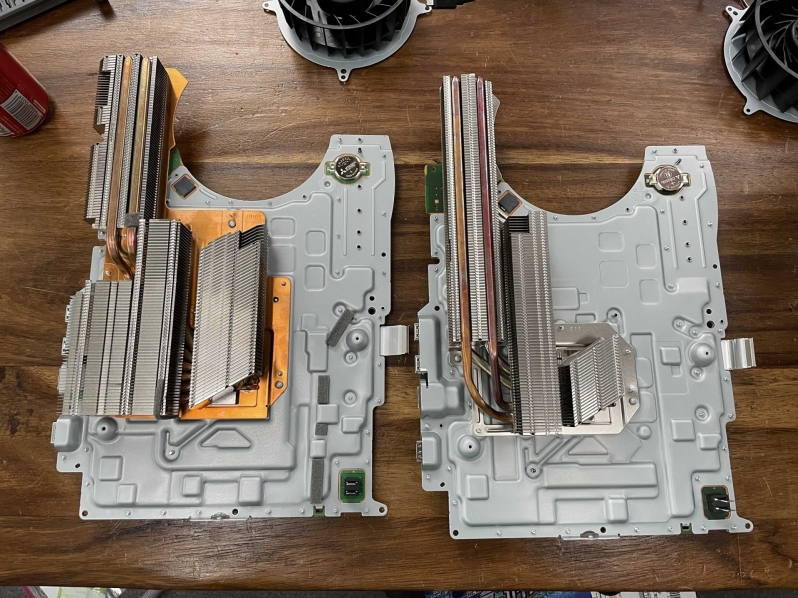 dazbobaby
What amazes me, someone managed to get hold of, not one, but two PS5's.


I can only assume Sony have tested the new smaller heatsink and found the increased temps doesn't damage the console long term... oh wait.

Xploited Titan
Actually, higher temperature at exhaust means more heat removed.
When one looks well, there seems to be longer heatpipes used to transport the heat away from the main production source.

And they made it all more cost-effective as well.

That first analysis seems to be premature, and that statement feels wrong.Quote

NeverBackDown
Yeah saying its running hotter because of a exhaust heat isn't exactly a great analysis.

No mention of fan RPM, temp probes at specific areas where changes were made, no temp probes in surrounding areas suggesting system wide increase thermal levels, and no mention of improved memory cooling or testing to confirm.

This could easily be just as efficient, yet cheaper, and solved by the fact its fan is running faster. It's silent as it is and an improved fan could provide more direct airflow at similar RPM. They definitely have room to spare in noise to reduce temps.

What a half assed video from such a YTer. You'd expect more from someone like Austin who's been around for a long time. This was basically a just first initial thought say what I think don't test anything to confirm lets get those views type of video.


If someone had a Dev kit software we'd be able to tell more information, but that ain't gonna happen. Gamers Nexus will probably do it right. I'll await there confirmation.Quote

looz
You expect deep understanding of thermals from a guy whose house burned down?