YouTube has failed to protect its users from scams

YouTube, and its parent company Google, has been sued by lawyers representing Steve Wozniak, the co-founder of Apple, and 17 others for allowing their names, photos and videos to be used by Bitcoin scammers

The scam in question is a common one, where adverts and videos are used to prompt live cryptocurrency giveaways, which ask victims to send Bitcoin with the promise of receiving double back through irreversible transactions. Once their Bitcoin is transferred, victims cannot get their money back.

Though these ads and scam channels, YouTube has profited from criminal enterprises by selling targetted advertising. Wozniak has attempted to contact YouTube, but has been unsuccessful in getting the company to stop the scammers.

In a statement, Wozniak said the following;

If YouTube had acted quickly to stop this to a reasonable extent, we would not be here now.

YouTube, like Google, seems to rely on algorithms and no special effort requiring custom software employed quickly in these cases of criminal activity.

If a crime is being committed, you must be able to reach humans capable of stopping it. 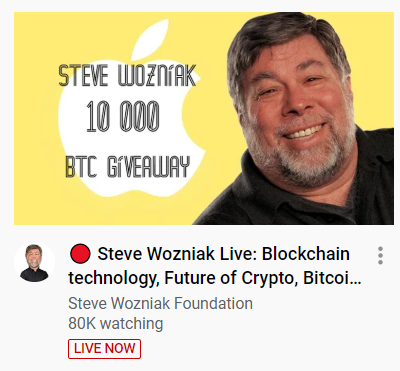 Joe Cotchett, a lawyer representing Wozniak, stated that other online services like Twitter have acted quickly to stop these scammers, referencing a recent hack where 130 celebrity accounts were used to promote similar scams. Twitter had shut down the scam within hours, while YouTube has allowed this behaviour to continue for months. Even worse if the fact that YouTube has profited from this scam through targetted advertising.

While YouTube's defence will be that they are not liable for the content that's posted by their users, this case argues that YouTube's inability to act against these scammers after they were reported is unreasonable.

You can join the discussion on Steve Wozniak suing YouTube over Bitcoin Scams no the OC3D Forums.