7nm LPP with EUV is expected to start production in mid 2018!

Samsung's Foundry Division has today revealed two new processing nodes, 11nm LPP (Low Power Plus) FinFET and 7nm LPP FinFET with EUV (Extreme Ultra Violet) technology.
11nm LPP is a new process that has been achieved by further scaling their existing 14nm LPP process, with this new node offering up to 10% chip area reductions and 15% higher performance with the same power consumption. This process will be marketed alongside 10nm, with 10nm being intended for premium mobile processors while 11nm is expected to bring more value for value to mid-high-end smart devices.
It has been confirmed that Samsung has developed their 7nm LPP EUV process technology on schedule, planning to start initial production in the second half of 2018. Since 2014 Samsung has processed almost 200,000 wafers using EUV lithography, hopefully giving the company enough experience to make a success out of their EUV technology early. 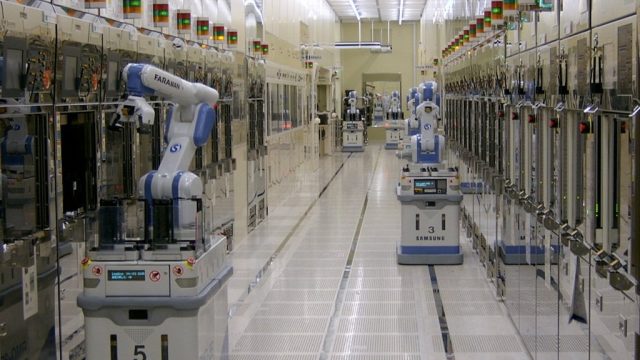 More details on these new process nodes are expected to be released later this month at the Samsung Foundry Forum Japan on September 15th.

You can join the discussion on Samsung's new 11nm and 7nm processes on the OC3D Forums.

NeverBackDown
250watts maximum out of 7nm for them? Well... I think AMD is out of that race for 7nm then for their gpusQuote

WYP
Quote:
Nope, the 250W mentioned is the power for the EUV source that the foundry tech uses. This is unrelated to the power draw of the products that are made by it.

The wattage indicates the number of photons that are exposed to the wafer at any given time. Energy is measured in watts, so a 250W EUV source can deliver 250 Watts worth of photons to the silicon wafer per second.

Long story short the higher wattage the EUV equipment the faster each silicon wafer is produced. The fact that they couldn't create EUV tech that is this powerful before has prevented the tech from being used before now.Quote

NeverBackDown
Oh gotcha. Didn't quite see that in the article so I assumed that was it's given limit.Quote
Reply