Samsung's graphics partnership with AMD is set to deliver great things, bringing the power of AMD's RDNA graphics architecture to the masses alongside Samsung's powerful Exynos series of mobile chips.
When Nintendo attempts to replace its Switch console, the company will likely opt to create a new handheld/home console hybrid, building on their success of its "best of both worlds" Switch platform. While sourcing chips from Nvidia will be an option for the company, Nvidia's minimal efforts on consumer-grade ARM products leaves them in a position where they might not be able to create silicon that's sufficiently "next-gen" for Nintendo's next console, at least on the CPU side.Nvidia hasn't updated their Shield tablet line with new silicon since their Tegra K1, which contains a Kepler-based graphics chip, while their Shield TV series of components has not been enhanced with updated chips than their Maxwell-based Tegra X1, the same chip the Switch uses. As it stands, if Nintendo wanted to create a next-generation Switch console, Nvidia doesn't have a new off-the-shelf SoC to sell them, a factor which will force Nintendo to look at alternative suppliers. This is where AMD's partnership with Samsung comes in.  Last year, AMD and Samsung entered a strategic partnership which was designed to deliver "low-power, high performance" graphics tech to the masses, merging AMD's RDNA graphics hardware with Samsung's already capable ARM SoCs. Together, both companies plan to deliver "groundbreaking graphics products", though this deal will take years to start bearing fruit. While AMD has made ARM processors in the past, their focus with ARM was never on mobile platforms, making the mobile market an area which is practically inaccessible to the company. While AMD's new Zen 2 series of x86 processors are incredibly efficient, ARM-based CPUs are still the leaders of the mobile market, which means that AMD either needs to invest in ARM components or find a partner that can handle the ARM side for them. In this regard, Samsung is an ideal partner for AMD, as it will enable the company to get its graphics components into more areas of the market and secures additional funding for future GPU developments. 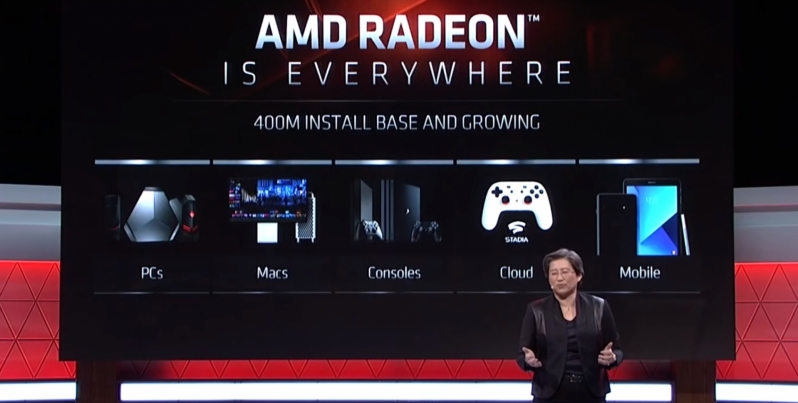 With Samsung acting as one of the world's leading producers or ARM processors and AMD acting as a world leader in consumer graphics, both companies are poised to take the world of high-performance, low-power graphics by storm. With Nvidia seeming uninterested in console design wins, Samsung's AMD partnership places them in the perfect position to create a potential Switch 2 SoC, assuming Radeon's graphics tech transitions well to mobile platforms. Nintendo has shown no signs of replacing their Switch console anytime soon, a factor which will give Samsung and AMD plenty of time to create a new gaming-ready mobile SoC. Alongside Samsung, AMD/Radeon has the opportunity to power the entirety of the next-generation console market, allowing Radeon to define mobile and home console gaming. You can join the discussion on AMD's chance to power Nintendo's next-generation Switch on the OC3D Forums.

NeverBackDown
Well the good thing is moving to RDNA or even 2 AMD already has small low power APUs so they probably already have much of the groundwork done for low power designs and it's just altering it to better fit ARM. Will still take years but definitely not as long as normal.

Seeing as AMD is really memory constrained it'll be interesting to see how they overcome this in a lower power format or if they even get to that point with such a weaker overall system.Quote

Stoly
Actually, nvidia already has ARM SoC based on pascal and volta. No turing based AFAIK though, kind of makes sense as there's no use for RTX on a mobile chips... yet.

nvidia is still investing really big on AI and DriveEX, I do expect them to come out with ARM-AmpereQuote

WYP
Quote:
Yes, but none of those are consumer-facing. They are designed for autonomous vehicles. While they could be adapted, there would be a lot of wasted silicon there.

Nvidia has said before that they don't really care about consoles. Low margins. The Switch deal worked because they already had a part on the market.Quote

NeverBackDown
Quote:
While true they have ARM CPUs using Nvidia Graphics IP they haven't updated their mobile gaming architecture since 2015 with the Nintendo Switch. They only updated the Switch in the Tegra X1+ with minor clock speed increases due to the fact they went from 20nm to 16nm.

Everything else has been out of scope for a mobile platform.

I fully do not expect Ampere on mobile and nobody should either. Ampere will be a Volta Successor for HPC environments. If you see Ampere it won't be for a mobile platform as you said, for AI or whatever else they need.


If anything it sucks for Nintendo as it will most definitely cause backwards compatibly to be basically none.Quote

grec
Personally I think NVidia would make an exception here, the Nvidia-Nintendo deal was around a decade in the making, originally they'd planned to collaborate with the 3DS but NVidia couldn't get the power envelope or costs low enough, NVidia has thrown a lot of money at trying to get Nintendo design wins over the years for whatever reason. As well as that, Nintendo I think have said repeatedly now that their plans are for the Switch to have a >10 year life cycle(A feat they managed with the GameBoy and DS lines) with upgrades, so that implies both new silicon, and backwards compatibility, which of course heavily implies they'd have to stick with NVidia but get a new part. (Also the Switch is a proven success at this point, and every Nintendo handheld line before has sort of had upgraded mid gen refreshes(GBC, DSi) and then spread into a semi separate 2nd gen(GBA, 3DS))

Though saying that, Nintendo has historically also been fond of providing backwards compatibility by just sticking the old chip in along side a new one, if that was economical.Quote
Reply