The PlayStation 5 is gonna be fast!

Footage of Sony's next-generation PlayStation, let's call it the PlayStation 5, has been released online thanks to Takashi Mochizuki‏, a tech reporter from the Wall Street Journal, showcasing the console's ultra-fast loading times.

Storage performance has been a huge limiting factor for games, making load-times long while also limiting how many new assets can be drawn onto the player's screen at any given time. Mechanical Hard Drives are not going to get much faster moving forwards, so Sony decided to take things in a new direction with their PlayStation 5 console, opting to utilise a proprietary solid state storage solution.

In the video below, Sony showcases Insomniac Games' Spider-Man, showing how the game's New York map takes 8.1 seconds to load on their PS4 Pro, while their PlayStation 5 demo system can do the same thing on just 0.83 seconds, which is almost ten times faster.

The second part of the demo focuses on world traversal, with Sony's PlayStation 4 hardware being limited by asset streaming times and HDD speeds, whereas Sony's PlayStation 5 demo system was able to traverse through the level at jet-like speeds, thanks to the speed of the PS5's storage. Better still, the PlayStation 5 didn't stop or hitch at any time, creating a smoother experience.

In their investor slides, Sony has also reconfirmed all of the PlayStation 5's specifications, including the console's new CPU and GPU hardware, its use of SSD storage, full backwards compatibility with PlayStation 4 titles, support for Ray Tracing, 8K resolutions, disks and 3D audio.

Much of the technology within Sony's next-generation PlayStation will be created by AMD, with Sony confirming that the system will utilise Zen 2 CPU cores and Radeon Navi graphics hardware. On the CPU-side the PlayStation 5 is set to deliver a monumental boost to system performance over today's PlayStation 4. 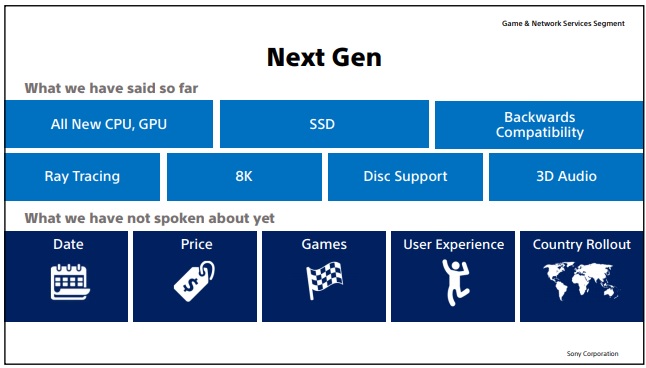 demonking
Looks promising, May be tempted to move to a console for the next gen. Will be even more tempted if Sony put in good mouse and keyboard support, I can't afford to stay in the PC gaming sector. When I upgrade my CPU and mobo this year it will be the last time I reckon, these GPU prices are not looking like they are going to reduce anytime soon and if consoles are looking at (looking at is the key here) 8k gaming and RT im gonna need to get a better GPU.Quote

NeverBackDown
Yeah new consoles are gonna be something. Roughly 1080 performance and a Zen 2 CPU is still a great option even today for 1440p60. And since consoles allow for deep optimizations, damn it's gonna be good. I hope it's not a 500GB SSD. That'll fill up quick!

At least they have a thunderbolt 3 option. Or anything to keep external storage fast enough so we can still expand our system storage.Quote

tgrech
Since it's a proprietary solution that would need to have fixed minimum speeds across all variants & setups I think we can assume the solid state storage is acting as a second level cache for the system memory, and from info so far that system memory looks like it'll be split somewhat too. I don't think there'd be much benefit in going beyond 128GB with how they've demo'd it so far, seems like it loads all the games media on initial launch to speed up in-game world load times & streaming, even 64GB would be more than enough for most titles atm since you don't need all the games media loaded in. Obviously, allowing users to access it as a storage device would make the use cases they've demonstared so far more or less impossible to guarantee for devs if a user wanted to use a USB device or similar for storing more games, so I don't think it's at all possible this will replace HDDs in any way.Quote

cooperman
The new crapbox has a ssd......it should've been there last gen....Quote
Reply