PCIe 7.0 is now in the works, delivering a 8x bandwidth boost over PCIe 4.0

As always, the march of progress must always continue, especially within the world of PCI Express. PCI-SIG, the organisation behind the PCI Express standard, has confirmed that they are now working on PCI Express 7.0, hoping to double the bandwidth offered by PCI Express once again while also increasing the standard's power efficiency while maintaining backwards compatibility.

While PCIe 5.0 is only now starting to become common on new high-end motherboards, PCI-SIG has already completed their next-generation PCIe 6.0 standard. This sets a clear pathway for hardware manufacturers that will enable the creation of more powerful and bandwidth-heavy devices. Beyond that, work on the PCIe 7.0 standard ensures that even higher speeds will be achievable in the future.

Currently, PCIe 7.0 is expected to be standardised and released to PCI-SIG members in 2025. Devices that support PCIe 7.0 will likely come in the years following this, likely in 2027 and beyond.

How powerful will PCIe 7.0 be?

There are several reasons why we need PCIe 7.0. For starters, the standard's development gives the PC industry a clear path forward, signalling that more bandwidth will be available though PCI Express in the future and that hardware manufacturers do not need to invest in proprietary interconnect standards to increase their potential bandwidth. These moves ensure that PCIe will remain relevant well into the future, and that is strong backwards compatibility can be maintained.

Another aspect of PCIe 7.0 is that is allows users to do more with less. A single PCIe 7.0 lane can offer users the same bandwidth as sixteen PCIe 3.0 lanes. Beyond that, PCIe 7.0's focus on increasing the standard's efficiency will impact both high bandwidth and low bandwidth devices. Being able to deliver more bandwidth for less power is a good thing for everyone.

Every three years, PCI-SIG hopes to continue doubling the bandwidth offered by PCI Express, and PCIe 7.0 is the latest target for PCI-SIG's hardware roadmap. Next up is PCIe 8.0, and it should offer users 1TB/s of bandwidth over x16 lanes!

What follows is a Press Release from PCI-SIG regarding PCIe 7.0. 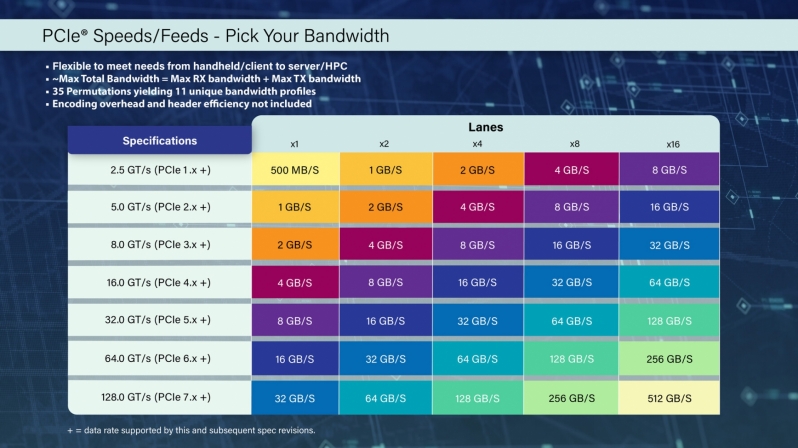 PCI-SIG today announced that the PCI Express (PCIe ) 7.0 specification will double the data rate to 128 GT/s and is targeted for release to members in 2025. "For 30 years the guiding principle of PCI-SIG has been, 'If we build it, they will come,'" observed Nathan Brookwood, Research Fellow at Insight 64. "Early parallel versions of PCI technology accommodated speeds of hundreds of megabytes/second, well matched to the graphics, storage and networking demands of the 1990s.

In 2003, PCI-SIG evolved to a serial design that supported speeds of gigabytes/second to accommodate faster solid-state disks and 100MbE Ethernet. Almost like clockwork, PCI-SIG has doubled PCIe specification bandwidth every three years to meet the challenges of emerging applications and markets. Today's announcement of PCI-SIG's plan to double the channel's speed to 512 GB/s (bi-directionally) puts it on track to double PCIe specification performance for another 3-year cycle." 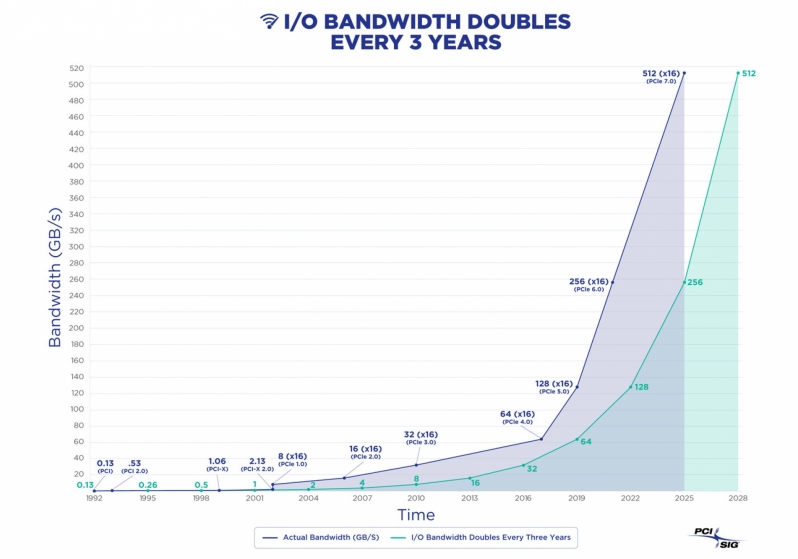 PCI-SIG technical workgroups will be developing the PCIe 7.0 specification with the following feature goals:

"With the forthcoming PCIe 7.0 specification, PCI-SIG continues our 30-year commitment to delivering industry-leading specifications that push the boundaries of innovation," said Al Yanes, PCI-SIG President and Chairperson. "As PCIe technology continues to evolve to meet the high bandwidth demands, our workgroups' focus will be on channel parameters and reach and improving power efficiency."

The PCIe 7.0 specification is targeted to support emerging applications such as 800 G Ethernet, AI/ML, Cloud and Quantum Computing; and data-intensive markets like Hyperscale Data Centers, High-Performance Computing (HPC) and Military/Aerospace.

You can join the discussion on PCIe 7.0 on the OC3D Forums.

NeverBackDown
Consumers don't need even 6.0 but it's crazy to think that even now the target markets that would need this could more than likely already use it today and fill up a 16 lane configurationQuote

Kleptobot
PCIe6 uses pam4 encoding to avoid having to double the clock rate of pcie5 and still achieve double the bandwidth. The argument put forward for this from pci-sig was that pcie5 was already fast enough to pose significant design issues for pcbs to ensure signal integrity and minimise cross talk. From what i can see pcie7 still uses pam4 (i don't see how they could squeeze more out of a frame and not run into massive reduction to the 3db cutoff) and doubling the clock...