More bandwidth? Why Not?

PCI-SIG has released version 0.5 of the group's PCIe 6.0 standard, which plans to push the capabilities of PCIe further by delivering a 4x bandwidth boost over PCIe 4.0. This increase in interconnect bandwidth will help fuel future generations of interconnected devices, pushing storage mediums to new performance heights while allowing today's storage speeds to be accessed with fewer resources.

Today, PCIe 4.0 devices has only started to become available on consumer-grade PCs, and PCIe 5.0 has only recently been ratified. This rapid growth in PCIe bandwidth comes from the increased I/O performance needs of today's computers, both within the server markets and within the consumer PC space.

Right now, PCI-SIG are on track to finalise their PCIe 6.0 standard in 2021, making it likely that PCIe 6.0 devices will be released sometime in 2023. It usually takes two years for a ratified PCIe standard to become available within the consumer market. This is due to the time it takes to design and manufacture compatible processors/systems and devices. 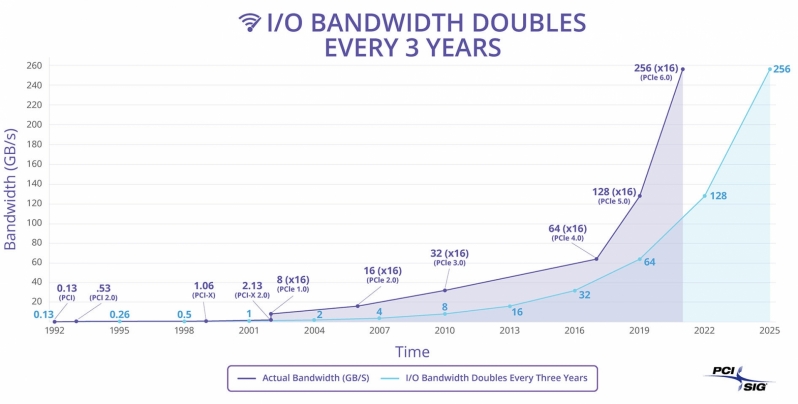 While a 4x speed boost over PCIe 4.0 may seem unnecessary for some, it must be remembered that these speed boosts will also reduce the PCIe lane requirements of many consumer devices.

With the capabilities of PCIe 6.0, the performance of today's PCIe 4.0 M.2 NVMe SSDs could be achieved over a single PCIe lane (rather than four). This could make it possible for future PCs to support larger numbers of fast M.2 storage devices, without the need to increase in the number of PCIe lanes that a system offered. Faster PCIe standards aren't just about providing more bandwidth; it's about providing more bandwidth with fewer PCIe lanes.

To put the performance of PCIe 6.0 into context. PCIe 6.0 could enable M.2 devices to deliver speeds that are up to eight times faster than today's Samsung 970 Pro series SSDs, which is widely regarded as one of the best performing PCIe 3.0 M.2 SSDs on the market. Another way to put it is with PCIe 6.0, the performance of a PCIe 3.0 16x configuration is equivalent to two PCIe 6.0 lanes.

PCIe 6.0 will enable higher levels of bandwidth for those who need it while granting PC users access to today's bandwidth levels over fewer PCIe lanes. The only problem with this rapid evolution is that new PCIe 4.0 devices will soon find themselves replaced with PCIe 5.0 and then PCIe 6.0 over the next five or so years. That said, should we complain about things progressing too quickly?

NeverBackDown
With this increase motherboards will still be expensive if not more despite needing less lanes due to bandwidth efficiency as you mentioned. Lanes may not increase but price certainly willQuote

Dawelio
This is nice and all, but PCIe 3.0 isn't even fully utilised by todays GPUs?...Quote

Avet
Quote:
2080 Ti and above need PCIe 16X slot. Everything else is fine with 8X. Either way, they are not making it for gamers.Quote
Reply