PC has now become Activision/Blizzard's most profitable platform, with PC earning almost as much as all consoles combined in terms of net revenue.
In Q1 2017, console revenues fall by $150 million over the same period of 2016, with PC revenues rising by $166 million, giving consoles a total revenue of $615 million and PC a total revenue of $566 million.
Here it must be remembered that Activision/Blizzard's console revenue comes from Xbox One, PS4 and other modern and legacy console platforms, with the recent drop in console revenues being attributed to the failures of console releases like Call of Duty: Infinite Warfare. PC, on the other hand, has seen huge sales growth, with sales being attributed to popular PC releases like Hearthstone and Overwatch, with overwatch becoming Blizzard's 8th $1 billion franchise. 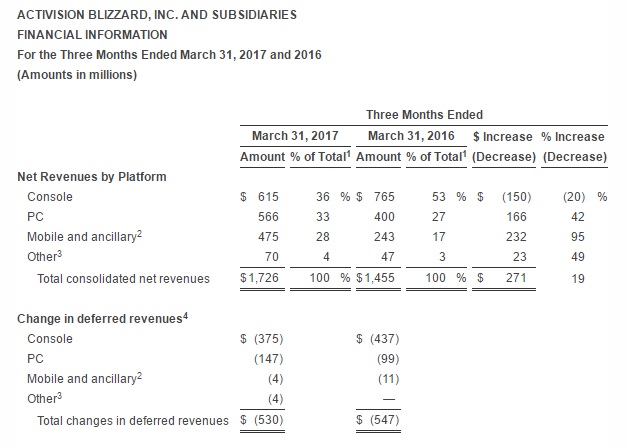 Total PC revenue is a mere 9% lower than console revenue this quarter, easily making PC the most successful PC platform in Q1 2017. The question now is whether or not this trend will continue as we move through 2017, as future releases from Activision could turn the tide in favour of consoles.

You can join the discussion on PC becoming Activision/Blizzard's most profitable single platform on the OC3D Forums.

NeverBackDown
They can thank Blizzard for that money. Nobody cares about Activision anymore.Quote

Morenomdz
Blizzard is the biggest cut on pc with WoW legion and Overwatch being the most used plataform PC, but in 2017 we have Destiny 2 on pc and that will be huge, next year we will probably have the next WoW xpack and something else. I can see blizzard keeping these numbers up on pc with the help of her little BFF Bungie.Quote
Reply