Backroom Antiecs
Apart from the sales area, the store is split into a technical/testing area and warehouse. Below the store is where the mini warehouse is situated which is over 600sq ft. Small but convenient as there is also a 5000sq ft warehouse located nearby where the bulk of stock is held.
So you want a pre-built, pre-overclocked system? You want it built by an experienced overclocker and system builder? You want it to have the best parts used but don't want to pay a ridiculous price? No problem! Gaining access to the PC build/RMA area I managed to interrogate Lucas who originally worked for Vadim so he knows a thing or two about PC building and overclocking. Experience like this is hard to come by so with Yoyotech you can be assured of a quality setup built by an experienced enthusiast. Every system built is strenuously tested over 24hrs with programs such as Prime95 and PC Burn-in to ensure when it reaches the hands of the end-user it will not fail. 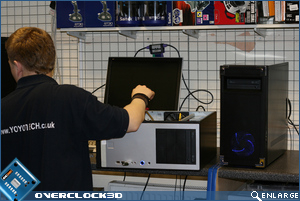 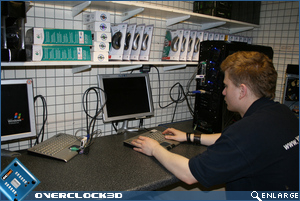 Selling pre-overclocked systems is a very time consuming service Yoyotech offer but I am happy to report that no corners were cut in the testing of the builds and, as an overclocker myself, the programs used were ones I would be happy to ensure stability and overclock verification. 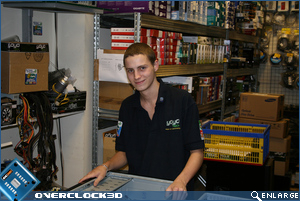 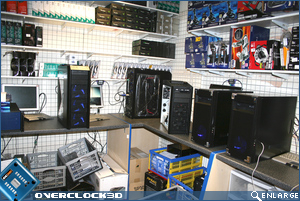 Yoyotech also build systems for the end-user and offer PC's for all tastes and budgets ranging from the £99 budget to the Ultra High-end, 'Warbird'. Yoyotech will also happily build a system to your specification of choice and happily advise you on your choice of components compatibility. 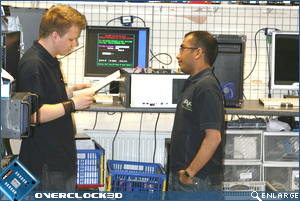 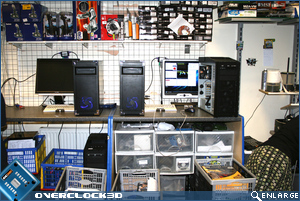 Inevitably, sometimes there are problems and a mark of a premium service is how the store deals with such problems. RMA's are initiated after an explanation of the problems and once the system or component is returned the problem is dealt with military precision. The components are tested over a lengthy period of time (12-24hours depending on the problem) and all attempts are made to replicate the problem so it can be best identified. It is also worthy of note that the backroom is not in some hi-tech air conditioned lab. All overclocked systems and base setups are tested at room temperature to ensure the setup will not overheat. Once the problem is identified and a fault replicated, Yoyotech will replace the item should it be in stock without a lengthy returns procedure to the manufacturer. This is a risky strategy on Yoyotechs part as the manufacturer may well just repair the item which Yoyotech cannot then sell but it is certainly a big plus point for anyone receiving a brand new items in place of the faulty one.
«Prev 1 2 3 4 5 Next»

llwyd
Wheeey bought from yoyo a few times in the past. Good shop and a great partnership

ionicle
i must say the article reads well

i have a local pc shop in scarborough, i wish they were as friendly, and as ...efficient, and uptodate as this, however, when i asked what the largest available 2.5" hard drive is, i was told, with a smile, that it was 250gig

dont spose you wanna open a shop up in bridlington,?

our last one just closed, and everyone has to travel to scarborough now..Quote

I am unfamiliar with Hindu, Urdu, Portuguese, Spanish, Polish, German and Russian.........

Spelling mistake - Its not Hindu - its Hindi with an 'i'

Just felt I had to tell you.

Other than that, it actually felt good to read that article.

I just wish that there were more reviews that reviews shops. Would be nice if someone reviewed Scan and Watercooling UK and Aqua-PC.Quote

And yes, secret shopper is on our list of things to do