4K 60FPS will be a target for the platform

The next generation of consoles is slated to arrive in 2020, delivering a significant upgrade over today's console offerings on both the CPU and GPU fronts, facilitating the next major shift in gaming graphics and world simulations.

Brad Sams,  an executive editor of Thurrott.com, has claimed that Microsoft's next-generation "Project Scarlett" console will feature AMD's upcoming 7nm Zen 2 CPU cores as well as a next-generation, likely Radeon, graphics unit, with backwards compatibility being a big concern for the gaming giant.

With Scarlett, Xbox is targetting 4K resolutions at 60FPS framerates, with Sams claiming that hardware will be less of a console differentiator than it has been in previous generations, with Microsoft planning to offer a variety of exclusive gaming software while bringing affordability to the table with game streaming services.

Given the designs of AMD's next-generation EPYC processors, it is likely that Microsoft's next-generation console will utilise a similar multi-die system architecture, perhaps using the same 8-core Zen 2 core clusters as EPYC, allowing Microsoft to use a proven off-the-shelf chip design from AMD while benefiting AMD with the economies of scale offered by high-volume console hardware. A unified package with an interconnected I/O die, 8-core Zen 2 CPU die and a custom Radeon graphics die seems probable for both the next-generation consoles from Sony and Microsoft. 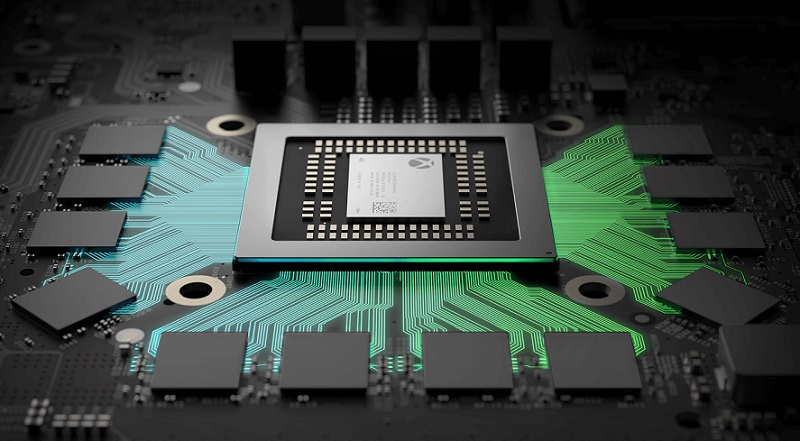 In the near future, Microsoft is also set to release a diskless Xbox One S console, targetting a lower price point by offering a smaller form factor while abandoning the console's costly 4K Blu-Ray drive.

You can join the discussion on Microsoft's Project Scarlett allegedly using AMD's Zen 2 processors on the OC3D Forums.

NeverBackDown
Nothing different than the rumors for PS5 so not that impressive I'd say. Especially since the guy claims there will be less to differentiate between consoles next gen

Not sure he realizes how both Xbox one and PS4 are virtually identical in specs. The difference in visual quality was 960p vs 1080p. Doesn't get much closer.. only unless they use the same hardware


Zen 2 alone will be a massive improvement in power. We would probably more than double even triple our processing power. Pair that with a 1070/Vega 56 class GPU in 2020 for either console and it'd be damn impressive and not all that much moneyQuote

I'm very excited for this console.Quote

NeverBackDown
Quote:
I find them all smooth as it'll get considering 30fps. I'm excited for next gen. I hope they'll all be able to easily do 1440p60(or higher). I couldn't care less about 4k, I just want the smoothness of 60. Heck I'd be happy to get a single player game that was 1080p144

tgrech
I found with my time on an XboneX there was a massive difference in image quality & visual fidelity in "light"/sports games that could easily hit 4k60, like Rocket League or Forza. While PUBG's framerates back then were often terrible, the native 4K image was also a massive leap up as the long distances in that games meant you were often basically looking out for moving pixel bundles at 1080p. If the CPU is what's holding many games back, I think we could see native [email protected] in a fair few less graphically intensive(Non story heavy single player games) games with only a modest GPU bump if it has 6-8 Zen2 cores, and 1600p checkerboard'ed or similar to 4K otherwise. Even on a 1080p screen, this is more or less the best form of AA you can get, which for me is one of the biggest issues with TV size 1080p gaming(All the zaggies and artefacts).Quote
Reply