Microsoft has just revealed the full hardware specifications of its Xbox Series X console, revealing exactly how powerful the next-generation of gaming will be.

Simply put, the specifications of Microsoft's Xbox Series X are breathtaking, exceeding that of most high-end gaming PCs. Better still, Microsoft has expanded this further with new software and hardware features that will help gamers get even more from their systems, making the Xbox Series X more than just a hardware upgrade.

For starters, Microsoft has revealed the specification of their custom Zen 2 and RDNA 2 processors, which will handle CPU and GPU workloads respectively. The CPU on the Xbox Series X sits close to AMD's Ryzen 7 3700X, a processor that costs over £260 at the time of writing. Microsoft has also added new features to its Xbox Series X to minimise CPU workloads for some tasks, which will ensure that the Xbox series X will get more out of its processor than its raw specifications suggest. For example, DirectStorage will reduce the CPU overhead of I/O operations.

On the graphics side, we have an AMD RDNA 2 based graphics component that offers 12 TFLOPs (Tera-floating point operations per second) of compute performance, packing a 2x improvement over the Xbox One X. Even better, AMD's latest graphics architecture deliver more real-world gaming performance per FLOP of raw computational power, making the performance improvement much higher than the TFLOPs numbers imply. On top of this, Microsoft has confirmed hardware support for MESH Shaders, DirectML, DXR raytracing and Variable Rate Shading.

Microsoft does not just promise beefier hardware with its Xbox Series X, they promise features that will allow developers to get more from their hardware than ever before. When compared to the baseline Xbox One, Microsoft has doubled their memory capacity to 16GB and has moved to faster GDDR6 modules. Add to this support for Sampler Feedback Streaming (SFS), and the Xbox series X will be able to make more efficient use of its memory for textures, acting as an "effective 2x or 3x (or higher) multiplier on both amount of physical memory and SSD performance."

Below are the full hardware specifications of Microsoft's Xbox Series X, and they will knock your socks off! 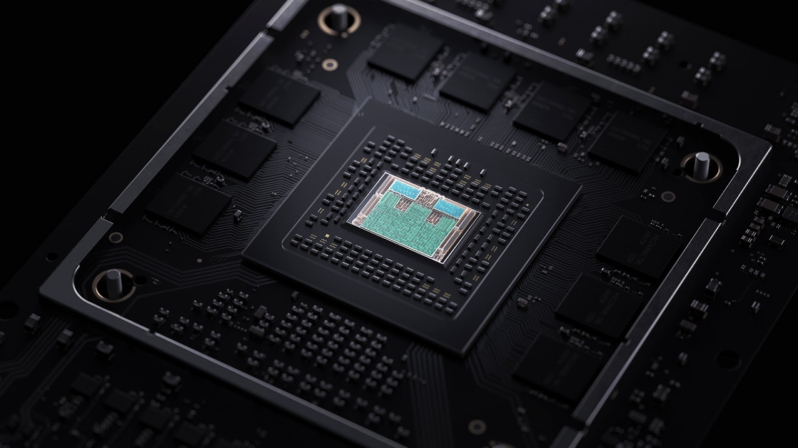 Some games will receive updates for Xbox Series X which will upgrade their resolutions, visuals and framerates (up to 120 FPS) to deliver a better gaming experience. Microsoft's upgraded memory and storage configurations will also help ensure that loading times are minimal and that games are more responsive than ever.

The Xbox Series X is designed to deliver AAA gaming experiences and stellar hardware performance. Project Acoustics is a sound model which allows Microsoft to create complex audio effects without putting much strain on the user's CPU. Project Acoustic will have plug-in support for both Unity and Unreal Engine and will utilise custom audio hardware to minimise the feature's performance impact on other areas of the system.

We have spoken about DirectML before at OC3D, and we always knew that it would be a "next-generation game-changer" (read more here). Now, Microsoft has confirmed that the Xbox Series X will support DirectML, offering up to 97 TOPS of 4-bit integer performance and 24 TFLOPS of 16-bit float performance through the Xbox Series X's graphics processor. Machine Learning can be used across a wide number of applications, from resolution upscaling to improving AI, animations and other aspects of a game's graphical quality.

With Microsoft revealing the Xbox Series X's specification today, we can be sure that team Xbox is confident that they can surpass Sony on the hardware side. Only time will tell how well these new consoles will be priced, but given the hardware cost of "equivalent" PC parts, we can expect Microsoft's Xbox Series X to be very expensive.

You can join the discussion on Microsoft's Crazy powerful Xbox Series X specifications on the OC3D Forums.

Dicehunter
All well and good but they need exclusives and not ones like Ori and the Blind Forest, While good they need games on the same level as Spiderman, God of War etc...Quote

AlienALX
I think exclusives are way less important when you have a gaming unit as powerful as that.

Yeah, they're nice, but it's getting to a point where I just want performance. The games will come, exclusive or not.Quote

Dicehunter
Quote:
If MS hope to do better than Sony next gen then they need exclusives like Sony has with Uncharted, Spiderman, God of War etc... those are what will sell these consoles especially considering the PS5 and XBSX are going to have nigh on identical specs.Quote

ImprovizoR
Quote:
It's not like the PS5 won't be powerful enough to run next-gen games. And if you add PS5 exclusives into the mix, you have to wonder what on Earth is Microsoft thinking?Quote

WYP
Quote:
I think we already know what Microsoft was thinking. That's why they have bought so many studios over the past number of years.

Microsoft has also been working on the value side of the equation with Xbox Game Pass, something which Sony has no response to at this time.

From what I can see, Microsoft has done a lot of work on the hardware/software side that I think Sony will lack. Microsoft has clearly put a lot of effort into this system with DXR, DirectML and DirectStorage.Quote
Reply