It looks like Intel's having issues with their "Foxville" 2.5Gb controllers - Packet Loss Expected

A hardware revision is due to address these issues

It looks like Intel's having issues with their "Foxville" 2.5Gb controllers - Packet Loss Expected

Over at XFastest, a slide has leaked which details potential issues with Intel's Foxville 2.5Gb Ethernet controller, a controller which will become commonplace on the company's Z490 series motherboards.

In their advisory Intel reports an "Inter-Packet Gap" (IGP) variance which sits outside the IEEE standard for 2.5Gb Ethernet, which can result in a drop in throughput in the 1-10Mb/s range. While this isn't a major issue, it points towards sub-standard performance from Intel's networking chips, the impact of which is still being evaluated by Intel as they test more 3rd party equipment.

In Intel's leaked slide, the company has noted that a hardware stepping fix will address this IGP variance in the second half of 2020. Intel has also noted that this fix is "aligned with Rocket Lake-S production (RKL-S). Rocket Lake is due to be Intel Comet Lake successor, a CPU architecture which will finally move Intel away from Skylake-based CPU cores on desktop systems. 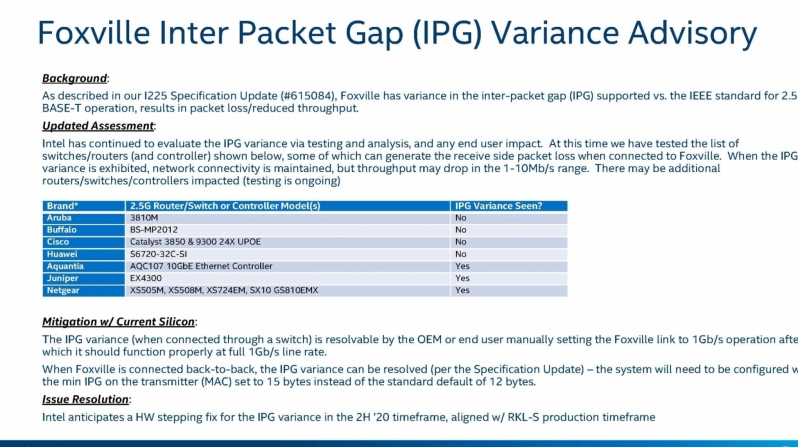 You can join the discussion on Intel's Foxville 2.5Gb ethernet controllers and their reported issues on the OC3D Forums.

AlienALX
good thing they spotted it now. Can you imagine another Sandy Bridge disaster?Quote
Reply