Nanoribbon is Intel's next step beyond FinFET

Intel's planning to move beyond its FinFET transistor layouts, hoping to transition to a new transistor layout called GAAFET, which aims to deliver heightened efficient levels and enhanced silicon performance.

Intel's GAAFET is 'nanoribbon', a new design which enables improved design characteristics over today's FinFET transistors. Samsung has already revealed its own GAAFET-style transistors with their planned 3nm MBCFET (Nanosheet) designs, which are due to enter risk production in 2020.

So what is a GAAFET, a Gate-All-Around transistor? The simple answer is that it takes the idea behind FinFET transistors to the next level, building upon its 3D nature to offer all-around (hence GAA, Gate-All-Around) coverage of the transistor's channel. FinFET, in a basic sense, places a fin within the GATE that has three out of four sides covered, whereas GAAFET transistors have all sides covered. This improved coverage can help lower power losses and increase a transistor's performance/watt characteristics.

Intel's Nanoribbon approach also offers the company the opportunity to widen their Nanoribbons to alter the characteristics of their transistors, granting Intel a useful optimisation option. This alternation allows the transistors to be scaled to meet size, power efficiency and performance requirements. With Nanosheet stacking and width alteration, Intel has a lot of versatility with their GAAFET transistors. 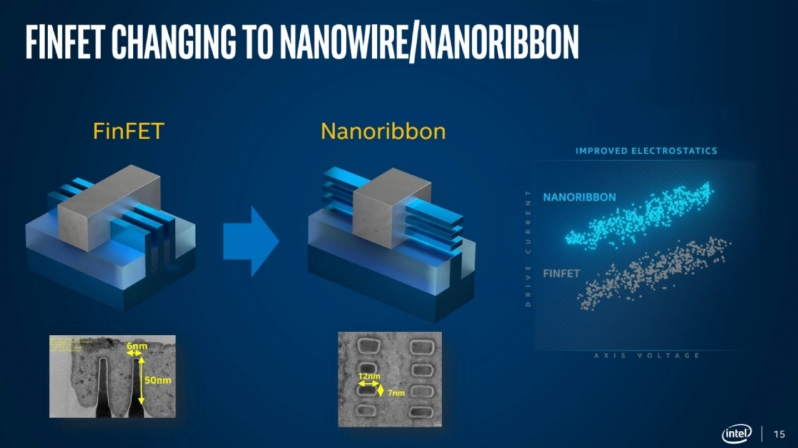 According to a report from Anandtech, Intel's CTO, Mike Mayberry, has stated that the company's nanoribbon technology will enter high volume production within the next five years.

Intel plans to deliver products using its 7nm process in 2021, starting with the company's Ponte Vecchio HPC accelerators. Beyond that, Intel has enhanced 7nm nodes planned for 2022 and 2023, placing the company's Nanoribbon technology into what could become Intel's 5nm process technology.

Samsung plans to jump to its MBCFET transistor designs with its 3nm node, and TSMC is likely to do the same. Note that Intel''s 5nm process tech is likely to offer similar transistor density levels as TSMC and Samsung's 3nm nodes.

Samsung has already released version 0.1 of their 3nm GAA MBCFET PDK, allowing companies to get to grips with Samsung's new design rules and prepare to start using their process when it becomes production-ready.

The benefits of GAAFET transistors have the potential to transform the computing market, enabling increased performance levels, heightened efficiency levels and increased density for future processors. These new transistors will help power the next generation of mobile, desktop and datacenter computing devices, which is great news for chipmakers and their customers.

You can join the discussion on Intel's plans to create next-generation "nanoribbon" transistors on the OC3D Forums.