An EU Commission has fined Google €2.42 billion after the conclusion of an anti-trust investigation into their shopping comparison services.
Google has been found to have given their shopping comparison services an unfair advantage over their competition, leveraging their dominance in the search engine market to give Google Shopping, formerly known as "Froogle" a boost. Google set their service on the top of applicable searches and demoted rival services in their search rankings, denying competitors the ability to gain the traffic they otherwise deserved.
Below is a statement from Commissioner Margrethe Vestager, who is in charge of competition policy, who says that Googe has denied the opportunity for other companies to innovate and compete and has denied consumers a true choice of services.

Google has come up with many innovative products and services that have made a difference to our lives. That's a good thing. But Google's strategy for its comparison shopping service wasn't just about attracting customers by making its product better than those of its rivals. Instead, Google abused its market dominance as a search engine by promoting its own comparison shopping service in its search results and demoting those of competitors.

What Google has done is illegal under EU antitrust rules. It denied other companies the chance to compete on the merits and to innovate. And most importantly, it denied European consumers a genuine choice of services and the full benefits of innovation. 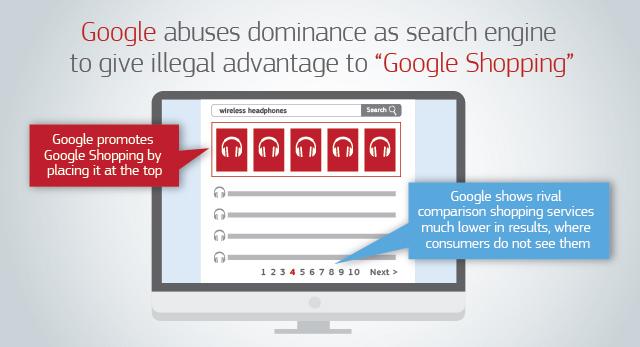 Since 2008, Google implemented changes to their strategy to promote their comparison shopping services, giving them what the EU defined as an "illegal advantage".  Below are two of Google's main changes in policy, the second of which is certainly morally wrong.

These changes were implemented in all EEA (European Economic Area) markets where Google has rolled out their comparison shopping services.

The EU Commission found that Google's practices stifled competition on the merits in comparison shopping markets and in doing so have deprived European consumers of genuine choice and innovation.

Google now has 90 days to pay their fine or face penalty fees that can be up to 5% of the daily worldwide profit of Alphabet, Google's parent company.

You can join the discussion on the EU fining Google for anti-competitive practices on the OC3D Forums.

NeverBackDown
Does it really matter? I mean why wouldn't you as a company want to be a part of the Google Ecosystem for sales? They are the most dominant player in the market. Get on board to get your sales.Quote

ADAVOL
Never really understood how the EU managed to argue their way around this to such a harsh conclusion in all honesty.


Case in point when you consider that Google if marketed would most definitely be considered a service shouldnt it be free to incorporate whatever it wants / feels would be beneficial into its service package in this case a shopping search function. Beyond that why should Google be forced to create a separate search engine (or domain page) just for its services shopping results at the advantage of its competitors; you dont see the local (non-IMAX) cinema advertising the local IMAX screenings now do you?


Besides how would you decided which price comparison website should be placed higher in the search results? Wouldnt putting TESCO above ASDA for example be providing unfair competition? In this sense arguing that putting Google at the top is unfair; would it be fair to have any one at the top?


Further and perhaps more importantly Google owns that domain (and subsequent webpages) so considering the technicalities wouldnt that mean that Google owns that space and as such be free to place whatever it wants there? (Provided of course that it isnt inherently illegal e.g. child pornography, drug sales, etc.) Arguing against this opens a very slippery slope relating to web freedoms; Facebook wants to push across its messenger service? Sorry cant do that its not fair on the competing Skype, discord, TeamSpeak, etc. services, guess Facebook is going to have to hide its messaging service and / or while also promoting the competition in the same prominence as its messenger service...


The only thing I partially agree with would be the deliberate lowering of price comparison websites rankings however if it is as worded in this article then Id argue then Google is fair to an extent as it doesnt /need/ to filter its own search engine results; they designed it. However for competitor sites they do need to filter them and while Im not privy to their algorithms I imagine these are considering factors such as accessibility (from multiple devices, etc.), content, advertisements, etc. and from my experience with these websites they typically come across as badly designed (doesnt transition well from computer screen to mobile phone, etc.) and are full of flash advertisements.


I think my fundamental gripe is that I just dont agree that Google shouldnt be allowed to prioritise its service over its competitors and I cant help but think of the analogy as thinking of Google as a book. If I write a book I reserve the right to put whatever I want in it (provided that its legal) and put the parts of said book in whatever order Id want too and, if I wanted to I could change it in a later revision to something else and, Id most definitely reserve the right to not mention competitor books.Quote

Greenback
I assume all that money will go to the companies who were losing out on sales, probably more like going to get a few extra toilet seats in BrusselsQuote
Reply