Microsoft is making an Android phone?

For years Microsoft had tried to compete with Android, and for years Microsoft failed to make a meaningful dent in the popularity of Google's mobile OS. "If you can't beat them, join them", that seems to be the motto of today's Microsoft; having just announced their new Surface Duo smartphone as a surprise addition to their latest Surface event.

The Surface Duo is a dual-screened mobile phone which seemingly takes on the same niche as cutting-edge folding phone, albeit without a folding screen. Two separate screens w5.6-inch will fold out to create an 8.3-inch tablet. This makes Surface Duo a great place to handle Microsoft's mobile Office software while also offering a compact form factor.

Microsoft has partnered with Google to deliver support for all Android applications, though users should expect this product to feel like a Surface device. Sadly, detailed specifications for this mobile phone are unknown at this time, though it is expected to utilise a Qualcomm processor. Pricing for the device is also unknown at this time.

The Surface Duo is due to release sometime in the Holiday 2020 timeframe, which means that the SOC which powers the device is unlikely to have been announced yet. Furthermore, this means that there is the potential for the device's design to change considerably within the interim. 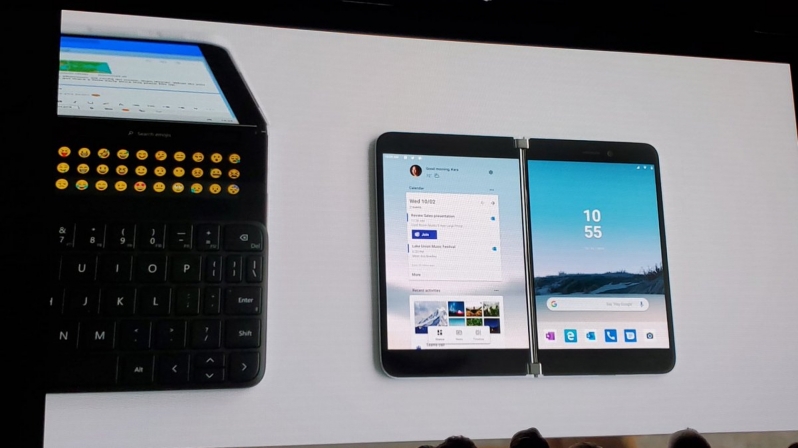 You can join the discussion on Microsoft's Surface Duo smartphone on the OC3D Forums.

Giggyolly
Sorry but I don't think dual screens is an excuse for those monstrosities of bezels.
It's like 70% screen to body ratio lolQuote

Warchild
Quote:
It's probably not full size because then your fingers when wrapped around the frame would be in contact with the screen and thus add touch input at times you don't want.

At least as it is, you can hook your fingers around the front and have areas you can safely provide stable grip.Quote

WYP
Quote:
One thing that is worth remembering is that this isn't due until late 2020, so the design could change a lot.Quote

tgrech
Yeah don't most phones use software mechanisms to bypass the side touching issue of no bezels? Another issue is that LCD screens still need some amount of bezel for the controller and this has two of them and aims at symmetry, still they could probably cut a fair bit off with many modern parts I think.Quote

Warchild
Quote:
Yes and no. The app or software in use can override the OS parameters of the smart recognition.

Asphalt 9 legend (I use this for testing terminals) is horrendous on a galaxy s10+ for it. The slightest touch of the screen edge recognises it as input and sends the car off the intended race line/brake etc.

Given our hate of bezels in this day and age, there has to be a specific reason for this design. It sure isnt pretty, so it has to serve a function > aesthetics reason.Quote
Reply