This dip is the most substantial decrease in value that Bitcoin has seen in 2017, with the currency's value remaining very turbulent over the past few months, with Bitcoin almost reaching a peak value of $20,000 earlier this week. At the start of this year, Bitcoin was worth around $998, making 2017 the cryptocurrency's most successful year yet, making many analysts fear that Bitcoin was becoming a financial bubble.

At this time it is unknown whether or not Bitcoin will bounce back from this price reduction, as the currency has proven to highly unpredictable in the past. Earlier this week a major Bitcoin exchange in South Korea, YouBit, has filed for bankruptcy after being hacked for the second time this year. There have also been several calls to regulate cryptocurrencies in recent weeks to prevent them from being used to avoid tax or fund criminal or terrorist organisations. 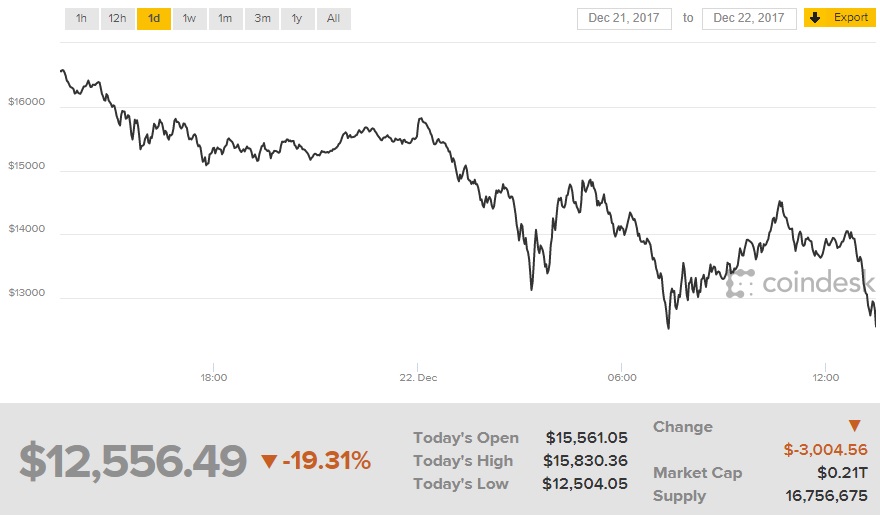 At this time is unknown exactly how Bitcoin and other cryptocurrencies will perform moving forward, with many predicting that 2018 will be the year of alternative cryptocurrencies like Ethereum, Litecoin and Zcash. Regardless, the cryptocurrency market remains turbulent and full of risk, giving investors the opportunity for both huge gains and significant losses in the near future.

You can join the discussion on Bitcoin's price decrease on the OC3D Forums. Do you think Bitcoin will bounce back?