A single Bitcoin was worth over $28,000 earlier today

Less than two weeks ago, Bitcoin's value passed the $20,000 barrier, and singe then, the value of the cryptocurrency has continued to shoot up. Now, a single Bitcoin is worth over $27,000, and according to Coindesk, the currency was briefly worth over $28,000.

Bitcoin has now fully recovered from its 2017 crash, and many are hopeful that Botcin will continue to be successful in 2020. Some analysts have predicted that Bitcoin's value could climb to over $100,000 over the course of 2021; that said, the value of Bitcoin has already dropped below its new high of $28,000, as every new high for the cryptocurrency is typically followed by some investors cashing out.

Further increase in Bitcoin's value will be fueled by increased use of the currency by mainstream payment companies. Paypal is already preparing to support Bitcoin, and Square already supports the currency. Institutional demand for the currency is also increasing.

At this time, it is unknown how Bitcoin's value will change in the long-term, with detractors predicting another collapse in the near-to-midterm future while others are predicting Bitcoin's value to reach as high as $100,000 next year.

As always, we will say that investing in cryptocurrencies is a risky venture. Cryptocurrencies have seen several rapid increases in value and painful crashes over the past few years. Generating a profit is not guaranteed, and exiting the market at the wrong time could result in hefty financial losses. 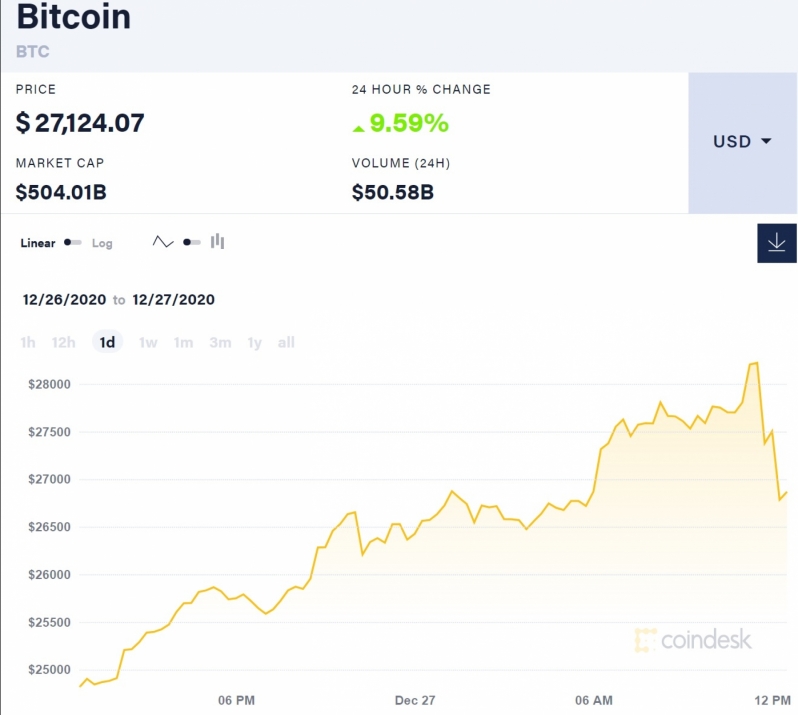 You can join the discussion on Bitcoin's value reaching a new all-time high of over $27.000 on the OC3D Forums.