A fast Wi-Fi router with some extra goodies

Let's face it, most of us use the router that's provided by our internet service provider. While there's no shame in that, it's worth noting that much better options are available.

There are a lot of benefits that higher-end routers can provide, from faster processors (which can speed up many networking operations), to additional or faster LAN ports, faster WiFi, greater Wi-Fi range, and support for whole-home mesh WiFi setups.

With ASUS' AiMesh technology, users of ASUS routers and nodes can expand WiFi networks to eliminate dead spots and create fast WiFi connectivity throughout your home. Additionally, ASUS' routers can be easily controlled using a web interface, allowing users to tweak their home networking setup to their liking.

ASUS has just revealed their new ROG Rapture GT-AX11000 PRO gaming router, which features a 4x4x4 Tri-band WiFi 6 networking setup. This router has a 2.4GHz band and two 5 GHz WiFi band, which together can handle combined speeds of 11,000 Mbps. This router also features a 2.5 Gbps WAN port and a 10 Gb configurable LAN/WAN port and four Gigabit LAN ports. These features make the GT-AX11000 Pro ideal for networks that can be pushed past Gigabit speeds, though enthusiast users may see this router's inclusion of a single 10Gb ethernet connection as a limiting factor for wired networking. 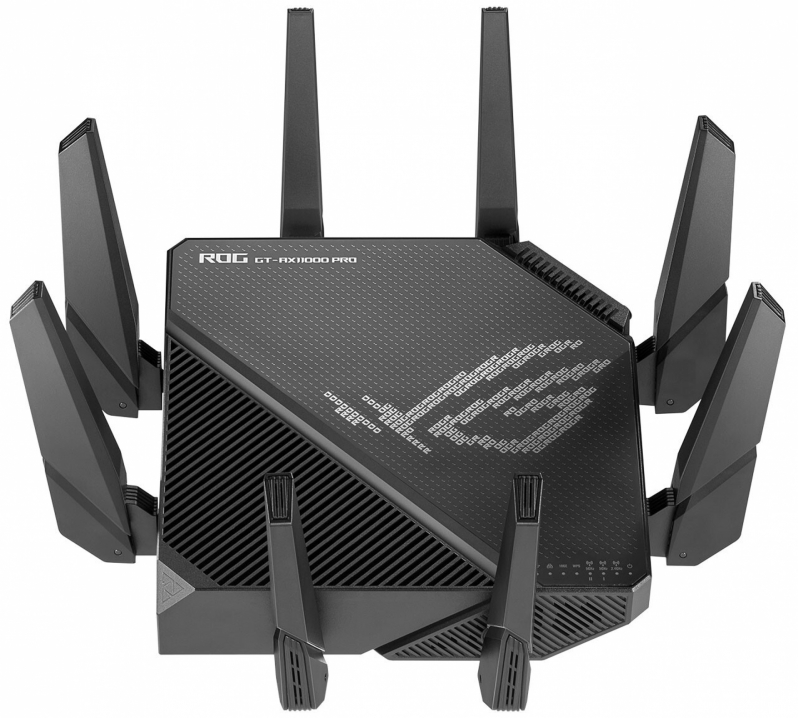 The ROG Rapture GT-AX11000 Pro is a powerful 4x4x4 tri-band WiFi 6 router that delivers combined speeds of up to 11000 Mbps. Its two 5 GHz bands and one 2.4 GHz band are fully backwards-compatible with older WiFi devices, while newer ones can take advantage of advanced tech to improve connection speeds and signal strength. For example, the second 5 GHz band features additional U-NII 4 spectrum at 5.9 GHz, unlocking access to less congested airwaves and more consistent downloading and streaming.

The 5.9 GHz spectrum has gone unused until now, so users with U-NII 4-aware devices can avoid signal interference from nearby WiFi networks that must compete with each other at the lower frequencies. And previously, users could only access two 160 MHz channels in the 5 GHz band. With the GT-AX11000 Pro, they can access a third, high-power 160 MHz channel for greater network capacity—or for the backhaul capacity of their AiMesh network.

With a combination of full 160 MHz channels, OFDMA and MU-MIMO technology, the GT-AX11000 Pro provides up to 4X-greater network capacity and efficiency in traffic-dense environments and heavily populated networks. Through this leading-edge tech, users can grant fast access to a dizzying number of devices, or they can supply ultrafast speeds to a particular connection.

For those who prefer an Ethernet connection, the ROG Rapture GT-AX11000 Pro features not one but two WAN ports. These are rated for 2.5 Gbps and 10 Gbps, and the 10 Gbps port can easily be toggled to LAN operation to boost transfer speeds within the network. To keep up with that echelon of performance, two of the 1 Gbps ports feature link aggregation, which allows users to combine separate Ethernet connections into one that is even faster.

Add load balancing to this mix, and users are fully empowered to tap into a veritable ocean of network bandwidth, not to mention the ultra-high-speed internet services that are becoming increasingly available. 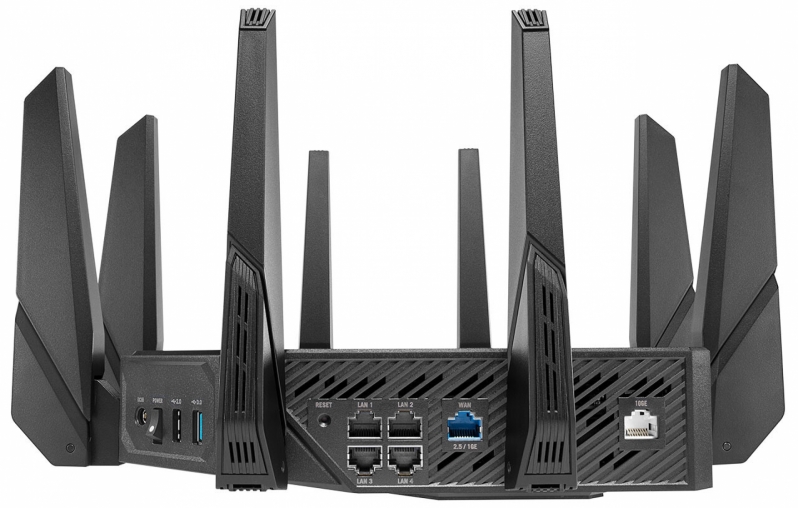 ROG routers are great for gamers

For both wireless and wireless setups, the ROG Rapture GT-AX11000 Pro is made for gamers of all types, whether they play on PCs, mobile devices, or game consoles. ASUS-exclusive triple-level game acceleration stabilizes connections to prevent jitter, reduce lag, lower ping and increase speed for amazing gaming experiences. Gaming traffic is optimized at every network junction, from the user all the way to a game server on the other side of the world. Users can also show off their style with an ROG logo on top of the router that features customizable Aura RGB lighting and effects and is designed with the letters 'ROG' embedded into a sleek matte surface.

Access and security, at home or on the road

All ROG routers can be fully configured in a web browser or the ASUS Router app for mobile devices. This free app lets users check the status of the network even if they are away from home, create access for guests, optimize bandwidth for gaming and other functions, review potential security issues and monitor their kids' online activities.

When users are away from their ASUS home network, they can also use the free Instant Guard mobile app. This lets them route their internet connection through the network via an encrypted VPN tunnel in just a few taps. This can make a public WiFi connection much safer to use, in every region of the world.

You can join the discussion on ASUS' ROG Rapture GT-AX11000 Pro Gaming Router on the OC3D Forums.

Kleptobot
Quote:
that got a genuine laugh out of me, well done sir.

For the price is this going to be any more performant than something from an enterprise vendor?Quote

robbiec
Quote:
Very probably, an enterprise vendor will be still be in verification testing for the latest WiFi standards. If you can find a Cisco ISR or Juniper SRX (to name but 2 Enterprise options) with equivalent specs for the same money I'd be very, very surprised.Quote
Reply