Are you ready for Halo lighting around your monitor?

ASUS has officially introduced their ROG Aura terminal, a product which is designed to control ARGB lighting products both inside and outside of a user's gaming system.

Out of the box, the ROG Aura terminal will ship with three addressable RGB LED strips, two 30cm strips and a single 60cm strip alongside three extension cables. This bundle will allow the unit to offer enough lighting to illuminate the inside of most PC cases or to create a "Halo" around a monitor.

ASUS' Halo lighting can be used to detect what is on screen and force each LED to emit appropriate colours to add extra colour to the viewer's field of vision, making games and movies more immersive. Halo will use the processing power of your graphics card to detect what is on screen, requiring the use of Windows 10 and a dedicated graphics card using HDMI or DisplayPort.

The ROG Aura Terminal will support four channels of addressable RGB LED, all of which support WS28112B RGB LED devices, with each channel supporting a maximum of 90 LEDs or a maximum LED count of 210 per Aura Terminal. Power for this unit can come from a Molex connection if inside a PC or by using a 19V DC power adapter when used as an external unit. Cables are provided that can allow this unit to be connected to a PC using both internal and external USB 2.0 ports. 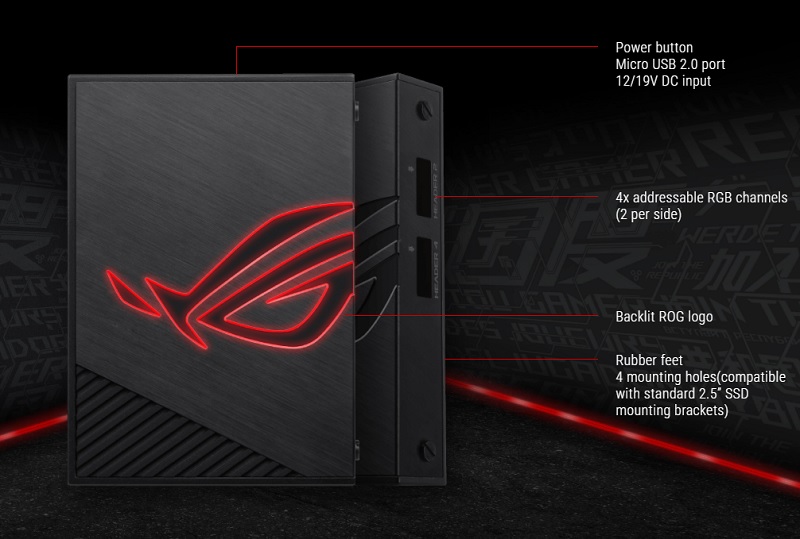 At this time ASUS has not revealed the pricing or release date of their ROG Aura Terminal, though it is expected to be showcased at Computex.

You can join the discussion on ASUS' ROG Aura Terminal on the OC3D Forums.

Peace Đ
I guess I'd rather put the strips around my monitors, right? Looks cool! Pretty much what Philips did with their Ambilight.Quote

Warchild
Looks like they have taken Logitechs new G560 speakers and copied its reactive design.Quote

NeverBackDown
So basically a rgb hub that is external or internally mounted?Quote
Reply