ASML wants to double their production of EUV machines in 2017

While many of our readers will have heard of TSMC, Globalfoundries, Samsung and Intel, these companies are not the only ones that maintain progress when it comes to advancing silicon lithography. There are many companies that are working in the background that supply these creators with the technology that they need to truly move things forward.
One of these companies is ASML, a Dutch enterprise that specialises in the creation of some of the most advanced technologies known to man.
Many of today's foundry technologies are based on DUV (Deep Ultra Violet) technology, which can support wavelengths of between 248nm and 193nm, but ASML is creating viable EUV (Extreme Ultra Violet) technology, offering wavelengths as small as 13.5nm. Converting that into more understandable terms this wavelength can fit into a millimetre 74,074 times with a little room to spare, making a human hair seem massive in comparison.
When compared to last year ASML has increased their sales by 25%, with expectations on a continued increased in sales in the coming quarters, with plans to increase their production of EUV machines to 24 in 2018 and to 40 in 2019. Yes, this is units in total, coming with a similar size to a city bus and with prices that are higher than €100 million each. 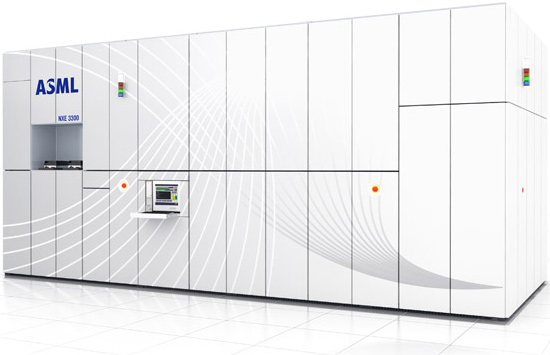 ASML currently has a backlog of 27 ordered EUV systems, which in total has a value of over 2.8 Billion Euros. A large number of these machines have been purchased by Intel and other companies like Samsung and TSMC, to help maintain their process node leadership.

Back in 2012, the company was only able to create EUV technology that offered a mere 25W source power, marking a 10X increase over the past five years. Now EUV is set to become relevant within silicon manufacturing, with AMSL expecting a further €2.2 Billion in sales next quarter.

When EUV technology starts to get utilised the world of silicon manufacturing and process technology will be transformed, allowing denser and more accurate process nodes to be created, increasing silicon density and efficiency to insane levels, allowing Moore's Law to continue for a while longer.

Over the past year, ASML's stock value has increased by 30% making the company worth over €53 billion.

You can join the discussion on ASML's latest technology on the OC3D Forums.

NeverBackDown
That's a lot of revenue from just 27 systems ordered.
Wonder what the profit margin is for themQuote
Reply