An Official Elder Scrolls Cookbook is in the works

Who wants to make some sweet rolls?

An Official Elder Scrolls Cookbook is in the works

It's been a while since we have seen a new Elder Scrolls game has been released, though this has done little to diminish the popularity of the series. For many, the announcement of The Elder Scrolls 6 was a highlight of E3 2018, with Skyrim seeing re-releases on all modern console platforms and withing VR for both PSVR and PC-based VR headsets.

Fictional worlds are often famous for the people and cultures that make up the world, with food becoming a notable aspect of what can make a fictional world believable. Even Jarl Balgruuf the Greater enjoys a sweet roll, and the Dragonborn enjoys an apple every now and then (when he runs out of healing potions).

To celebrate the world of Tamriel an official Elder Scrolls cookbook is in the works, featuring recipes that span from Skyrim to Morrowind and Cyrodiil. The book will be written by Chelsea Monroe-Cassel, who previously worked on official cookbooks for World of Warcraft and Game of Thrones.

The Elder Scrolls official cookbook will release on March 26th, currently selling for slightly under £25 on Amazon UK and under $17 in the US. 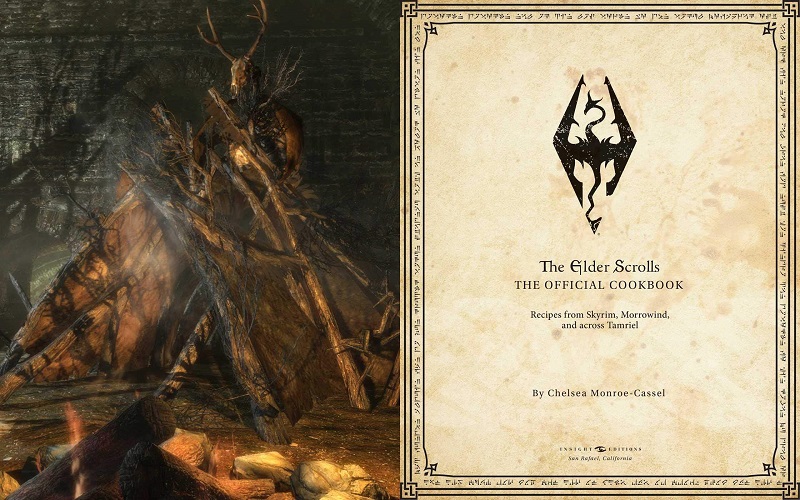 Are any of you interested in making some sweet rolls? You can join the discussion on the official Elder Scrolls cookbook on the OC3D Forums.

demonking
Anyone know where I can get scrib jelly and qwarma eggs? Seems Tesco doesn't stock emQuote

ImprovizoR
If Bethesda ever releases a physical version, don't pre-order it. Keep in mind that it could be handwritten on a piece of toilet paper.Quote

AlienALX
Quote:
After the travesty that is Fallout 76 and me being in a £175 hole I am back to pirating games. Seriously, it's back to being joke levels again.

The ironic part? it was Fallout 3 that got me stumping up the cash for games again. I really thought Bethesda could do no wrong.

I will never pre order another Bethesda game. TBH? all the time they are using that crap engine I won't buy any of their games, period. Seriously it's so bad it gives me motion sickness and headaches.Quote

Wraith
Quote:
Not something you should be claiming fella, support the whole dev team not the production company. It's a huge effort making games and piracy is not something I personally can accept.Quote

Games these days are all crap. Try and remember, I've played titles such as Half Life and Half Life 2. So I know what a good game is supposed to be, and none of the games I have bought and paid for are very good.

I trusted Bethesda to not completely fleece me. I thought that is what they didn't like, and didn't think that is what they were about. I was totally wrong. £175, and they could not even provide the product I had paid that much money for. First they screw me with a bag, then they give me the worst game I have ever played in my entire life. It really is a complete eyesore.

It doesn't work, crashes all the time, looks fuzzier than my chest and is just complete trash. It's a ten minute "in out in out wipe it on the curtains", a completely blatant and utter con job.

I said years ago that I never bought any Origin titles. Well, I never bought any EA games. And I maintained that stance for many years. I only ever buy them when they are on sale cheap, as I don't want my money encouraging their crappy tactics.

Well now I am that way about Bethesda. As I said, it is truly ironic that Fallout 3 was the game that made me rethink my stance, and from that moment on I bought and paid for every single game I played, even if many were rubbish.

But now? at £175? yeah, I don't think so. It's not even like I have not tried. My buddy and I have played it all over Christmas, but it's just been no fun at all. Had it not been for him I wouldn't have played it for more than a couple of hours, but he seems hell bent on getting some sort of value out of it and we all know that isn't going to happen.

They upped the stakes, threw their dice and crapped out. And it has repercussions. You don't get to fleece people like that and just walk away, laughing on your way to the bank.

I wouldn't even mind if it weren't so utterly blatant and full of BS and lies. I mean FFS the other night we were walking across a town (all boarded up of course, as is the tradition in that game) and something lifted straight out of Skyrim f*****g flew over us.

Like, really? they are really going to be that lazy and that stupid to do things like that? It seems so.

It's awful. Just, absolutely awful. They can't even get the level system correct so my friend and I came up across first a level 35 monster (we are level 13) and then a level 45 ghoul that killed us about eight times before we could get away. I threw 8 molotovs at it, 3 baseball grenades and 11 frag grenades but we couldn't kill it because it was basically impossible, what with it being four times higher than my friend (who was level 11 at the time).

We then go go a town to hand in and finish a quest, where we are met by about 30 level 35 super mutants. I broke every weapon I had, before we high tailed it out of there.

That simply should not happen AT ALL. Then we were faced with more grind work killing scorched to rob them of their s****y weapons because all of our s****y weapons had broke.

It really is absolutely no fun whatsoever.Quote
Reply