AMD's stock prices started skyrocketing last year after the company announced a new licencing deal with Chinese companies that is worth over $293 Million as well as securing AMD additional revenue through royalties.

Since than AMD has continued to showcase some strong hardware releases with their Polaris GPUs, announced 3 new Semi-Custom SoCs, all of which are likely to be used in future games consoles and have showcased their new Zen CPU architecture.

Right now AMD's new graphics hardware is selling well and their Zen's CPU performance has been exceeding the expectations of a lot of industry insiders, making AMD seem like a very attractive company to invest in. On August 24th last year AMD's stocks were worth $1.75 and now they are worth $7.62, which is an increase of just over 334%. 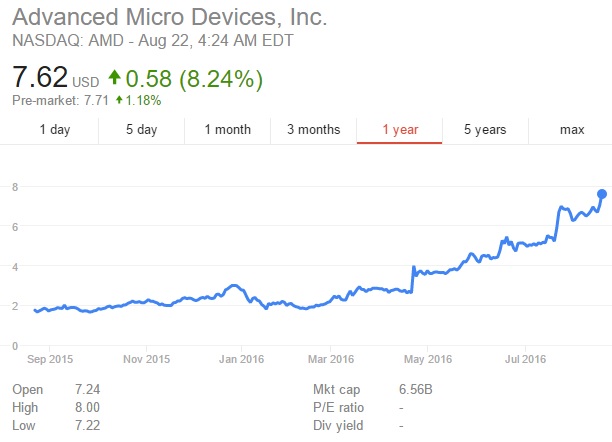 AMD's Lisa Su has stated that the company expects to regain client compute and discrete graphics market share over the next quarter, stating that this will be due to their strong software and the high power efficiency of their new Polaris GPU Architecture.

One thing to note is that this comes not long after Intel has announced major layoffs and plans to move their focus outside the traditional desktop PC market, leaving the door wide open for AMD to make some market share gains moving forward.

You can join the discussion on AMD's increasing stock prices on the OC3D Forums.

AMD's stock price has risen by over 330% in the past year.https://t.co/VPx3TIR4LS pic.twitter.com/aG727FDp2w

MacLeod
Definitely good news. The PC enthusiast market is definitely better off when AMD is doing well and pushing Intel and Nvidia. Wish I'd bought some though when it was still around $3 a share. I honestly didn't expect it to rise this much this fast.Quote

NeverBackDown
Quote:
Wish I bought some too.. would make good money off of it!
No one expected it to be this fast. Even industry experts were amazed at how strong it's becomingQuote

shambles1980
i massivly predicted this in the last therad Booh yah!.
Should have probably done something about itQuote

AlienALX
This is really good