Earlier tonight, AMD released their quarterly earnings for Q3 2018, delivering positive results despite the crash of cryptocurrency related product demand. Revenues are not as high as expected, with AMD's $1.65 billion in revenue sitting in the lower realms of the company's ambitious $1.70 billion (+ or - $50million) revenue target.

AMD has stated that "Blockchain-related GPU sales in the third quarter were negligible" this quarter, drastically lowering the demand for Radeon graphics hardware, offsetting some of the gains made by AMD in the CPU market, where the company's Ryzen and EPYC products have continued to be strong performers.

This quarter, AMD's revenue was $1.65 billion, which represents a 4% increase Year-over-Year (Y/Y) and a 6% drop Quarter-over-Quarter (Q/Q). During this time, AMD's Gross margins have increased to 40%, thanks mostly to AMD's IP related revenues and the success of AMD's high-margin EPYC and Threadripper series processors.

AMD's joint venture with THATIC generated $86 million in revenue for the company, which when combined with "memory and inventory related adjustments" accounts for around 2% of AMD's margin's boost. It is likely that AMD's IP related revenues will grow in the coming quarters. 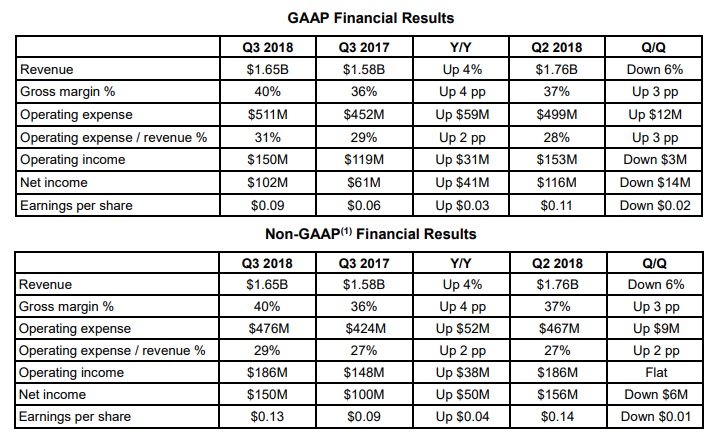 Splitting things up into AMD's major business units, we can see that AMD's Computing and Graphics segment has a middling success, with 12% growth Y/Y and a 14% decline Q/Q. In this segment, AMD's Ryzen processors have had strong sales, but the company's Radeon graphics segment has seen a significant drop in revenue. AMD blames their poor Q/Q performance on "lower graphics revenue".

AMD's Enterprise, Embedded and Semi-Custom division earned revenues of $715 million, representing a decrease of 5% Y/Y and a 7% increase Q/Q. This Y/Y decrease is primarily due to lower semi-custom revenue, which makes a lot of sense given this year's lack of new console launches/hardware releases. This revenue decrease is offset by higher server sales, which are driven by AMD's EPYC processors. AMD's Enterprise, Embedded and Semi-Custom Division has increased its operating income to $86 million, which is an increase both quarter-over-quarter and year-over-year.

While AMD's financials may appear to be poor when compared to Q2, AMD has proven that they can increase their margins and maintain profitability despite weak Radeon/graphics sales. This is also the first time which AMD's joint venture with THATIC has contributed to AMD's quarterly revenue report, marking the start of what is likely to be a highly profitable partnership for the company.

You can join the discussion on AMD's Q3 Financials on the OC3D Forums.

Dicehunter
They need to start throwing some money at developers to implement Radeon specific features.Quote

NeverBackDown
Quote:
That's a waste of money. Pour the money into Radeon. The specific features comes along with market share.Quote

Dicehunter
Quote:
The amount of people I've seen over the years that go and buy an Nvidia card simply because a new game they like has some exclusive graphical Nvidia effect is insane.


AMD need something like that down the line, Market share first as you said but down the line they do need to do what Nvidia has done with devs and just throw buckets of money at them.Quote

There's really no reason for AMD to invest into it. If they could just make a competitive architecture it wouldn't really matter. They already know all the tricks Nvidia pull and they have access to there SDKs. It's just up to AMD to make something that's competitive. Nvidia at this point has a lot of technology invested into gaming. AMD won't compete outside of architecture. So invest into that and then push MS to push more AMD friendly technology (as in AMD can design something that runs whatever technology faster than raw computation). That's the best way forward.Quote

dihartnell
Quote:
My take on it is People aren't really buying Nvidia for a specific feature or graphical effect in a game.

I doubt the majority of.purchasers research to that level . They buy them because they are faster and AMD GPUs unlike their CPUs are not really cheaper or provide more value due to the crazy prices due to the mining craze. That's finally almost over with any luck.

Even in the mid range people's buying habits are influenced by the perception that Nvidia is just faster due.to them commanding such a lead uncontested at the top end.

AMD needs to do what they have in the CPU. It doesn't have to be the outright fastest. It does need to be very competitive performance at the right price and they still need to contest the high end just like they have with threadripper.


It creates the right buzz and association that they are a great alternative to nvidia..and will lead to a more competitive gpu market.Quote
Reply