AMD has reported the company's Q2 2019 financial, revealing that the company has met its earnings targets, generating $1.53 billion in revenue. This is up 20% from Q1 2019.

When compared to Q2 2018, AMD's financials are down, dropping 13% in year-over-year. AMD's lowered Q1 revenues are primarily due to their Computing and Graphics segment, as AMD has moved from a time where cryptocurrency miners would purchase every GPU they could manufacture to a time where demand from the crypto market has dried up, and Nvidia has provided stiff competition within the gaming market thanks to their Turing series of graphics hardware.

In AMD's Enterprise, Embedded and Semi-Custom segment, revenue is down 12% year-over-year and up 34% sequentially, this change is mostly thanks to lower demand for semi-custom products and increases in higher EPYC sales. This change makes sense as we approach the end of the PS4 and Xbox One's lifecycle, though these revenues are expected to increase in 2020 thanks to Sony's AMD-powered next-generation PlayStation console. 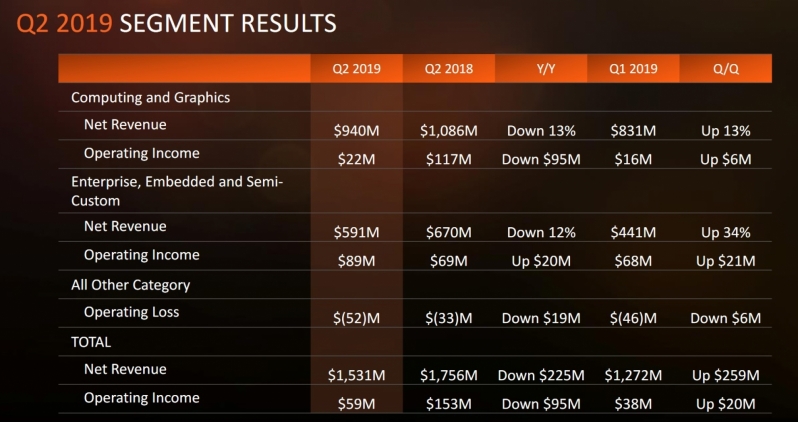 In Q3 2019, AMD expects to generate $1.8 billion in revenue +/- $50 million, representing an increase of 18% sequentially and 9% year-over-year. This increase in revenue will be driven by higher Ryzen, EPYC and Radeon sales.

Some analysts were expecting AMD to announce a Q3 revenue target of $1.95 billion, leaving many disappointed in AMD's quarterly outlook. AMD expects its full-year 2019 revenues to offer a mid-single-digit improvement over 2018. AMD's non-GAAP gross margins are set to be approximately 42% in 2019.

You can join the discussion on AMD's Q2 Financials on the OC3D Forums.