Next-gen Radeon and Ryzen products will be fabbed by TSMC

Globalfoundries has left the leading-edge foundry market, halting the development of their 7nm manufacturing process to focus on their existing 14/12nm technology.

AMD has been a long-term partner of GlobalFoundries, with the later starting its life as AMD's foundry arm, which was later spun off to become an independent company. On the surface, it may appear like Globalfoundries' abandonment of 7nm will drastically harm AMD, the reality is that the change will not result in any changes in the company's public roadmap.

While AMD's current-generation Ryzen, Vega and Polaris products are all fabbed with Globalfoundries, the company's 7nm plans were never reliant on them. Today, all of AMD's taped out 7nm products are using TSMC's 7nm process, including Vega 7nm, which will release later this year to the enterprise market and AMD's 2nd generation "Zen 2" CPU cores, which are set to release in early 2019. AMD's "Navi" graphics architecture will also use TSMC's 7nm process.

Today, AMD's Mark Papermaster confirmed that AMD plans to focus the breadth of their 7nm product portfolio on TSMC's 7nm manufacturing process. Moving forward, AMD will continue to work with Globalfoundries on 14/12nm products at their New York fab, where AMD Ryzen, Radeon, and EPYC processors will continue to be built. 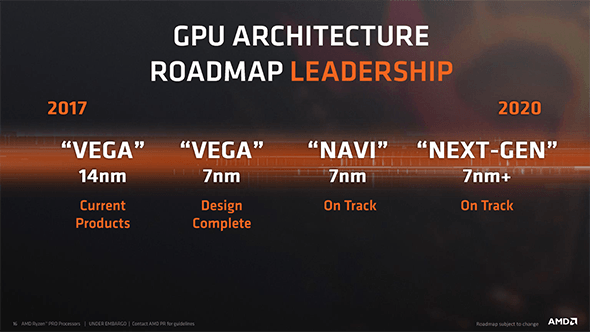 7nm is set to be the next major process node in the semiconductor industry, offering a considerable boost in transistor density and performance over current-generation nodes like Globalfoundries 14/12nm and TSMC's 16/12nm technologies.

AMD backed TSMC's 7nm technology as early as possible, which will allow AMD to release 7nm processors before Intel gets the opportunity to release CPUs on their competing 10nm process node. This advantage will allow AMD to gain additional market share from their rival thanks to the benefits of their Zen 2 architecture and TSMC's 7nm technologies, offering no shortage of avenues for increased silicon performance.

You can join the discussion on AMD backing TSMC for all of their 7nm products on the OC3D Forums.

hmmblah
Disappointing, but at least they have a backup plan with TSMC.Quote
Reply