AMD has released their Q4 2018 and full-year 2018 financial results, delivering Q4 revenues that were well within the expectations set in Q3, despite market trends which have seen both Intel and Nvidia miss their Q4 earnings targets.

AMD's Lisa Su has stated that they plan to deliver their "strongest product offerings ever" in 2019, thanks to their next-generation 7nm hardware lineup, expecting continued revenue growth in the coming year.

In 2018 AMD has boasted a 50% growth in client CPU shipments year-over-year (YoY) and doubled EPYC server shipments Quarter-over-Quarter (QoQ), offsetting issues within the client graphics market and lowering Semi-Custom sales, which were due to the crash of crypto-currency related GPU sales and today's gaming console landscape. Both Sony and Microsoft are late into their current console lifecycle, making Semi-Custom console ship sales in 2018 lower than previous years.

In Q4 AMD has seen a 6% YoY growth in revenue, with increasing sales in their Computing and Graphics Segment and growing Threadripper demand offsetting lower demand for consumer graphics cards in late 2017. AMD has also reported "record datacenter GPU revenue".

AMD's total revenue this quarter was $1.42 billion, a value that seems meagre when compared to Intel's $18.7 billion in Q4 revenue. In 2019 AMD expects high single-digit growth in yearly revenue, projecting earnings of $1.25 billion plus or minus $50 million in Q1 2019. 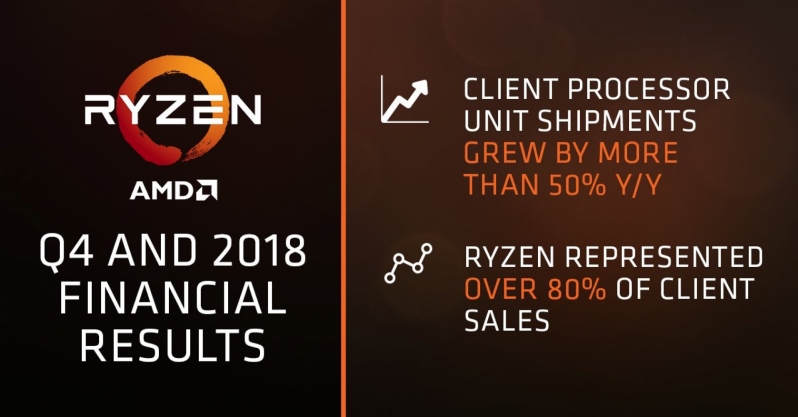 2018 was AMD's most profitable year since 2011, which is a big deal given the company's need to continue investments into future product designs. In Q4 AMD claimed that 65% of their revenues came from products that released in 2017/2018, showcasing the high demand for AMD's latest products.

AMD's expected 12% QoQ and 24% YoY reduction in Q1 2019 revenues is mostly due to lower demand for dedicated graphics hardware, thanks mostly to the lack of cryptocurrency-related GPU demand. Semi-Custom revenue is also expected to be lower, though Ryzen, EPYC and Radeon datacenter GPU sales are all expected to increase in Q1. 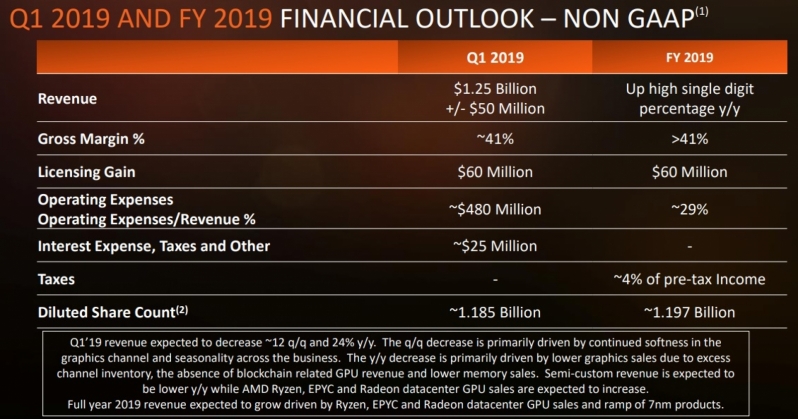 In 2019 AMD expects to see large growth in Ryzen and EPYC processor sales, offsetting the decline in blockchain related GPU revenue and securing low single-digit revenue growth for the company.

2019 is set to be another strong year for AMD, building upon the momentum of their Zen architecture with their second-generation core design on leading-edge 7nm lithography. Both Ryzen 3rd Generation and EPYC 2nd Generation are expected to launch in mid-2019, both of which are expected to be highly competitive within the client and datacenter markets respectively.

You can join the discussion on AMD's Q4 and full-year 2018 financials on the OC3D Forums.

NeverBackDown
Very good write up, I've read other articles about this from actual investors sites and none of them had at the very least AMDs photos.

It'll be interesting to see there Q1 results for Semi Custom and then leading into Q2. If it starts to rise, you'll know Consoles will have started to purchase semi custom chips. Could be excitingQuote

WYP
Quote:
Cheers man. Investor sites will place timing over everything else, so I guess they didn't get the time to get AMD's images/slide deck.

Hard to know what to expect from Semi-custom. It isn't expected to get higher in Q1, with recent rumours suggesting that next-gen consoles will release in a 2020 timeframe.

The most interesting thing is that AMD is expecting growth this year despite a weaker than last year Q1 and pretty much no blockchain GPU revenue. They expect Ryzen and EPYC to do very well in 2019.Quote

NeverBackDown
The Zen architecture as a whole has single handedly turned the company around, so for it to basically on there own make them turn a profit despite other markets falling behind, is impressive. I will say Lisa Su has done wonders for AMD. She has turned that company around with minimal resources. Though she still has a ton of work to do for GPUs. The constant leadership turnover isn't helping.Quote
Reply