AMD has confirmed that they have amended their long-term Wafer Supply Agreement (WSA) with GlobalFoundries, securing the company more flexibility with 7nm nodes "and beyond".

In August 2018, GlobalFounderies announced that they were halting the development of their 7nm process technology, deciding the refocus on high-growth markets instead of the leading-edge lithography market. This meant that AMD could no longer rely on GlobalFoundries for cutting edge lithography, creating a fundamental shift in the strategic partnership the companies possess.

Under the terms of their existing WSA, AMD would have to play a penalty to GlobalFoundries is they purchased silicon wafers from a 3rd party, such as TSMC or Samsung. This clause makes little sense given GlobalFoundries lack of a 7nm process node, as they cannot compete with other 3rd party silicon foundries in this area, giving AMD little justification for paying royalties to them.

AMD has now negotiated "full flexibility for wafer purchases from any foundry" for 7nm or smaller nodes, which means that the company is no longer obligated to pay Globalfoundries any fees for 7nm or lower products. Globalfoundries will remain a partner for AMD with 12nm or larger process nodes, with the same charges applying if they use similar nodes from 3rd party companies, with AMD committing to purchasing 12nm and above chips from the company in 2019 through to 2021. 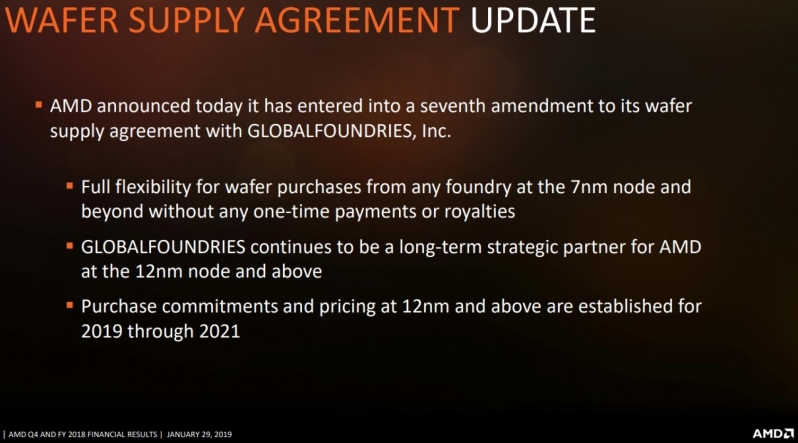 You can join the discussion on AMD amending their Wafer Supply Agreement with GlobalFoundries on the OC3D Forums.

rkb
it seems amd has a lot of flexibility nowQuote

NeverBackDown
Surprised this took longer to get done tbh. I figured it would have been a month at most to amend the agreementQuote

WYP
Quote:
I'd imagine that there is a lot of legalise to navigate with such an old agreement. This had to happen given GlobalFoundries' 7nm failings, but re-writing an agreement like this takes time.

The WSA will last until 2024, but who knows what AMD has planned for after 2021.Quote

WYP
Quote:
Hard to know. People did start getting suspicious when it was semi-confirmed that both Zen 2 EPYC and 7nm VEGA were both from TSMC.Quote
Reply