SK Hynix Inc. (or ‘the Company’, www.skhynix.com) today introduced the world’s fastest 2Znm 8Gb(Gigabit) GDDR6(Graphics DDR6) DRAM. The product operates with an I/O data rate of 16Gbps(Gigabits per second) per pin, which is the industry’s fastest. With a forthcoming high-end graphics card of 384-bit I/Os, this DRAM processes up to 768GB(Gigabytes) of graphics data per second. SK Hynix has been planning to mass produce the product for a client to release high-end graphics card by early 2018 equipped with high-performance GDDR6 DRAMs. 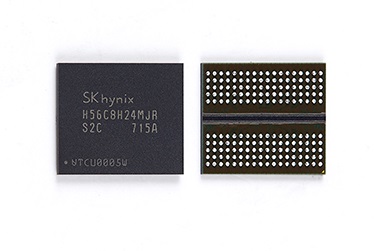 In the GPU market the move to GDDR6 will be huge, though it remains to be seen whether GDDR6 or HBM2 will be dominant in the high-end GPU market. GDDR6 will be easier to implement, given HBM2's need for direct to chip communication via an interposer, though HBM2 also offers the benefits of lower latency and increased levels of bandwidth and capacity per chip.

At this time is in uncertain whether HBM2 or GDDR6 will become dominant in the GPU market moving forward as both memory types certainly have their benefits. With an early 2018 release planned, it is also likely that Nvidia will be releasing their upcoming Volta-series GPUs using GDDR6 memory, though it remains to be seen whether or not Nvidia plans on creating an HBM2 powered consumer GPU.

You can join the discussion on SK Hynix's GDDR6 memory on the OC3D Forums.

NeverBackDown
Basically a refined GDDR5X with a little more speed but much better voltage levels. They were able to release it pretty fast considering GDDR5x didn't come out much to long ago.Quote

Dawelio
Quote:
Haha, we all know who that is... Nvidia!

WYP
Quote:
GDDR5X was made my Micron and pretty much nobody else, GDDR6 was always coming but Micron made GDDR5X to fill in the gap by making a few key changes.

GDDR5X is pretty much a refined GDDR5, doubling the prefetch size to achieve some performance gains. In theory, this was going could achieve double the performance of GDDR5 but that hs not materialised (some estimate that it will max out at around 12Gbps). With the release of the GTX 1080 it has 10Gbps chips and now with the 1080Ti it has improved to 11Gbps, yes it is much better than GDDR5, but not GDDR6 material.

Nobody has ever mentioned the power characteristics of GDDR5X, so for all we know it consumes more power than GDDR5, can't really be sure.

GDDR6 offers a proper improvement that is worthy of the name GDDR6, lower power consumption and double the performance. This is similar to the move from DDR3 to DDR4.Quote

NeverBackDown
I know. All I was saying is this is a refined 5x. Which it is

It's not that great of a performance improvement over 5x. But it reduces power consumption. So thats refined in my book