12GB packages will soon be available to smartphone makers

Mobile phones are entering the era of 5G and AI, creating a need for devices that offer greater memory capabilities than ever before, both in terms of speed and capacity.

Samsung, one of the world's leading memory makers has announced that they have started mass producing 12Gb LPDDR5 memory modules, while also announcing plans to combine eight of these modules to create 12GB LPDDR5 packages later this month.

With their 2nd Generation 10nm-class 12Gb LPDDR5 memory modules, Samsung hopes to enable device makers to create the next generation of flagship smartphones, with the company's latest 5,500 Mbps modules offering a 1.3x increase in speed over the company's existing 4,266Mbps LPDDR4X modules while consuming 30% less power. This ensured that Samsung's LPDDR5 memory modules deliver greater levels of performance while having no negative impact on battery life.

To ensure that they can keep up with the industry's demand for their 12Gb LPDDR5 memory, Samsung is considering a transfer of its 12GB LPDDR5 production to the company's Pyeongtaek campus in 2020. Next year, Samsung expects to finish development of 16Gb LPDDR5 memory modules, hoping to cement a competitive edge within the DRAM market.

At this time it is unknown when these new memory modules will become available within mobile devices. 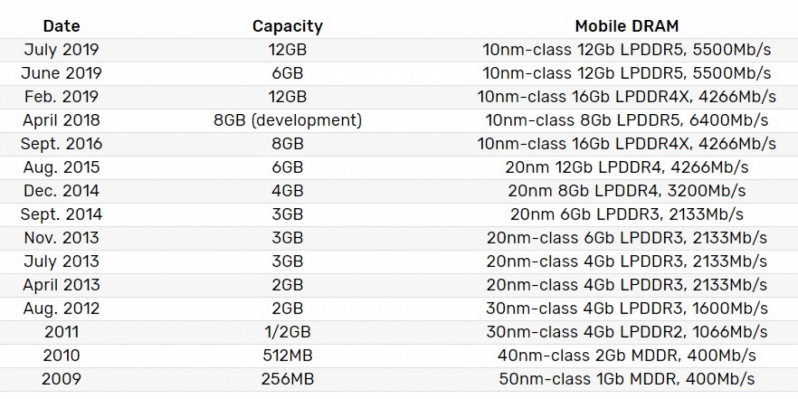 You can join the discussion on Samsung's 12Gb LPDDR5 DRAM modules on the OC3D Forums.