When will we see this new memory type in a consumer GPU?

Samsung has revealed their new GDDR6 memory modules with the release of a new document that states that the company has managed to gain 36 CES 2018 Design and Innovation Awards.

The company states that this new memory is the "fastest and lowest power DRAM", stating that it can offer speeds of 16Gbps and operate at 1.35V. Today's GDDR5 memory typically runs at up to 1.5V with speeds that typically max out at 8Gbps.

Samsung lists this memory as 16Gb, which means that this memory should offer 2GB of capacity per module, which is great news for any GPU makers who want a lot of VRAM capacity with a relatively small number of VRAM modules.

Samsung 16Gb GDDR6 Memory – The fastest and lowest-power DRAM for next generation, graphics-intensive applications. It processes images and video at 16Gbps with 64GB/s data I/O bandwidth, which is equivalent to transferring approximately 12 full-HD DVDs (5GB equivalent) per second. The new DRAM can operate at 1.35 volts, offering further advantages over today’s graphics memory that uses 1.5V at only 8Gbps. 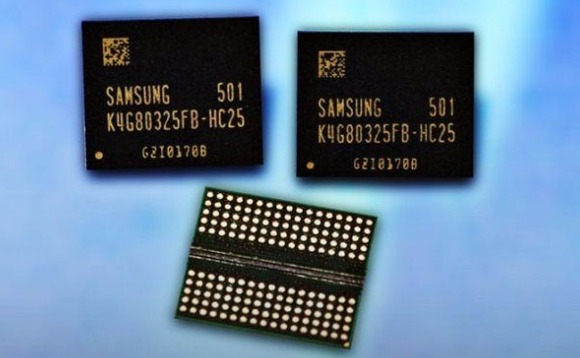 It is likely that we will see more of this memory at CES 2018, with the potential to see this new memory type in a new product later in 2018. At this time it is unknown whether or not we will see GDDR6 memory in next-generation GPUs.

You can join the discussion on Samsung's GDDR6 memory on the OC3D Forums.

NeverBackDown
Gonna be super expensive. Wonder what the benefit is over HBM long termQuote

AngryGoldfish
Quote:
Yeah, I'm curious how it will compare against HBM, at least in gaming applications. The bandwidth of HBM allows Vega and Fiji to really scale well with higher resolutions, something Nvidia falls behind in, at least with the 256-bit cards. I'd like to see the GTX xx80 cards come stock with more bandwidth in the future. GDDR5X somewhat mitigates it, but HBM is still the king for higher resolution, with the Titan and Ti cards coming behind.Quote

NeverBackDown
I'm also curious to see how GDDR6 will stack against(pun intended) HBM2 outside of consumer/gamer applications as well. I think HBM still has a while to go before becoming mainstream so I personally think while 6 is gonna be expensive, it'll be cheaper still than HBM and therefore be on every Nvidia card in the foreseeable future.
I think AMD will shoot themselves in the foot and stick with HBM for the high end. They have become so architecturally attached at this point I don't see them ditching there designs and doing a complete flip flop.Quote

AngryGoldfish
Quote:
Especially since it was admitted that HBM was actually necessary to keep the TDP down, which is saying a lot since Vega is already so far behind Pascal in that front and Fiji was behind Maxwell.Quote
Reply