410GB/s of bandwidth on a single memory stack

Samsung's latest 16-gigabyte HBM2E modules can offer data rates of 3.2Gbps, which translates to 410GB/s when applied across a memory stack. For context, AMD's Radeon RX Vega 56 offers 410GB/s of memory bandwidth over two HBM2 memory chips. Yes, Samsung's Flashbolt HBM2 memory offers a 2x boost in speed over the memory used in the RX Vega 56. If these modules were used in a Radeon RX Vega 56-like graphics card, which features two HBM2 modules, Samsung's Flashbolt HBM2 memory stacks would offer users 820GB/s of bandwidth and 32GB of VRAM.

Furthermore, Samsung has stated that it has reached speeds of 4.2Gbps to deliver 538GB/s of memory bandwidth per stack of Flashbolt memory. These speeds are listed as being for "certain future applications", which means that these speeds are unlikely to be seen on shipping products anytime soon. That said, Flashbolt's standard 410GB/s data rates are already impressive.

Samsung plans to start volume production of these HBM2E memory modules in the first half of this year. These memory chips were created using a series of ‘through silicon via’ (TSV) interconnects, with each HBM2E package interconnecting over 40,000 microbumps. Another factor that's worth noting is that while Samsung calls its memory HBM2E, JEDEC formerly recognises this memory as an HBM2 product, making HBM2E a "marketing name" that denotes the memory's enhanced bandwidth capabilities. 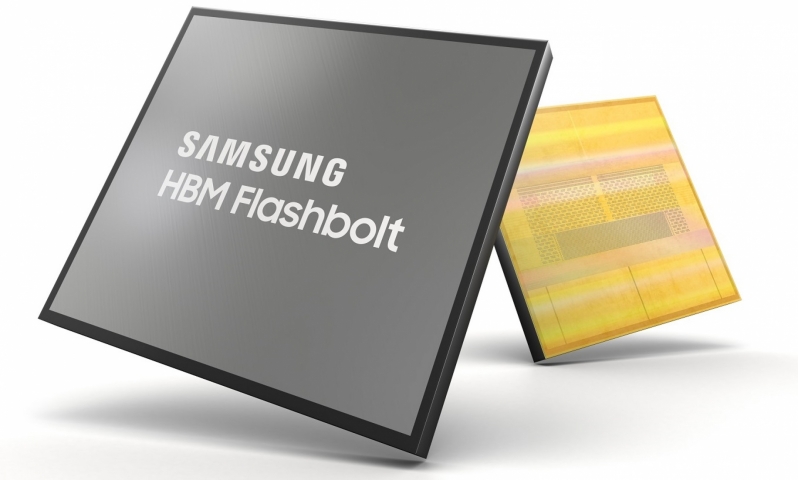 At this time it is unknown when Samsung's Flashbolt HBM2 memory will become readily available within a consumer-grade or enterprise-grade product, but at a minimum, these high-speed HBM2E chips will help inject new life into the HBM memory standard.

If this memory was used to build AMD's Radeon VII GPU, the graphics card would offer 1,640GB/s of memory bandwidth, which would be a staggering increase over the 1,024GB/s that the card shipped with.

You can join the discussion on Samsung's HBM2E Flashbolt memory on the OC3D Forums.