Micron are targetting speeds of up to 64GB/s per package

Micron has officially confirmed that they have started volume production of their GDDR6 memory, offering capacities of 8Gb (1GB) and speeds of up to 64GB/s (16Gb/s) per package.

With this announcement, the three largest players in the GDDR DRAM market have started mass production of GDDR6 memory, which should provide ample supply for the creation of future graphics, automotive, networking and acceleration products. PC gamers will likely see GDDR6 memory first in AMD/Nvidia's next-generation graphics cards, delivering a substantial boost in memory bandwidth over GDDR5 and to a lesser extent GDDR5X.

Micron has already listed 12Gbps and 14Gbps memory on their website, with the company's latest press release indicating that they are targeting up to 16Gbps with the GDDR6 memory packages, a 2x improvement over 8Gbps GDDR5 modules. GDDR6 also offers lover voltage requirements per chip with standard GDDR5 packages requiring 1.5V for 8Gbps speeds while Micron's GDDR6 needs 1.25V and 1.35V for speeds of 12Gbps and 14Gbps respectively. 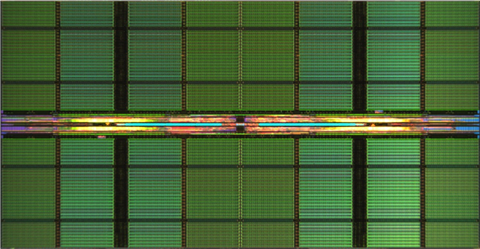 Micron has already sampled their GDDR6 memory products to chip makers to design controllers and other IP for the new memory type including RAMBUS, who has already created a PHY solution for next-generation AI, networking, ADAS and graphics applications.

The major advantage of GDDR6 memory is that it functions a lot like GDDR5, eliminating a lot of the disadvantages of HBM2 memory while also allowing a lot of existing knowledge from the GDDR5 days to be applied to future products. The introduction of GDDR6 should also alleviate some of the demand for HBM2 in future products, which is excellent news for consumers as demand for HBM2 memory is already outstripping supply.

GDDR6 memory is reportedly one of the key components of Nvidia's upcoming GTX 11/20 series of graphics products, making volume production from the world's three largest memory producers a big deal for both Nvidia and their AIB partners.

You can join the discussion on Micron starting mass production of their GDDR6 memory on the OC3D Forums.

Dicehunter
September I reckon we'll get new GPU's, First the mid range card that Nvidia tout as high end and then eventually the actual high end card next year.Quote

For whatever reason, you reminded me of YuGiOh.Quote

NeverBackDown
is that a meme card or is that actually real? LolQuote