Micron wants to push the industry towards DDR5 memory. To do this, Micron has started a technology enablement program, offering customers early access to a wide range of technical resources to help customers design and quality their next-generation computing products for use with DDR5 memory.

The Problem - Why we need DDR5

CPUs are getting larger and larger, and as core counts increase, CPU cores are becoming more and more bandwidth constrained. On mainstream CPU platforms, we have moved from having quad-core processors capping off Intel's Skylake series to having a 10-core model at the top of their latest Comet Lake series. On the Intel side, up to 10 cores need to be fed with two DDR4 memory channels, and on the AMD side, up to sixteen cores need to be fed with two memory channels.

To enable the next-generation of computing, the industry needs faster DRAM. To fully utilise the power of modern CPU platforms, we need tonnes of memory bandwidth, and the design changes seen with DDR5 will address many of the issues facing DDR4. 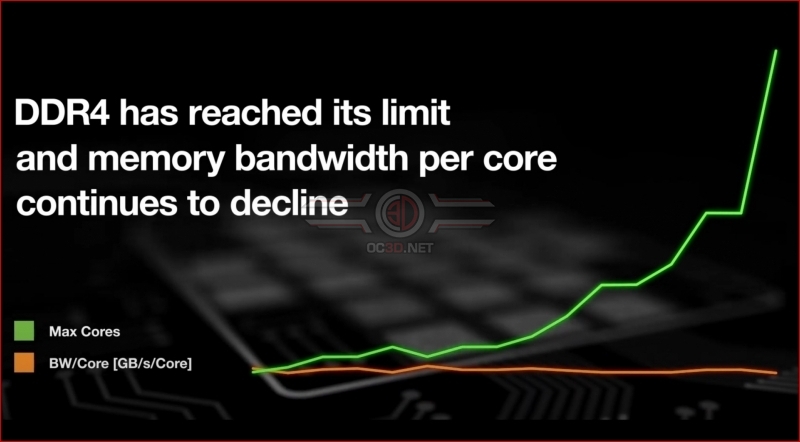 A doubling of memory bank groups

This design change will increase DDR5's burst lengths to 16, which increases the efficiency of the memory bus and enables higher data rates than DDR4. On top of this, DDR5 offers onboard ECC, bringing increased reliability to all DDR5 memory modules. Before now, ECC was only available on enterprise/workstation-grade DDR4 modules. 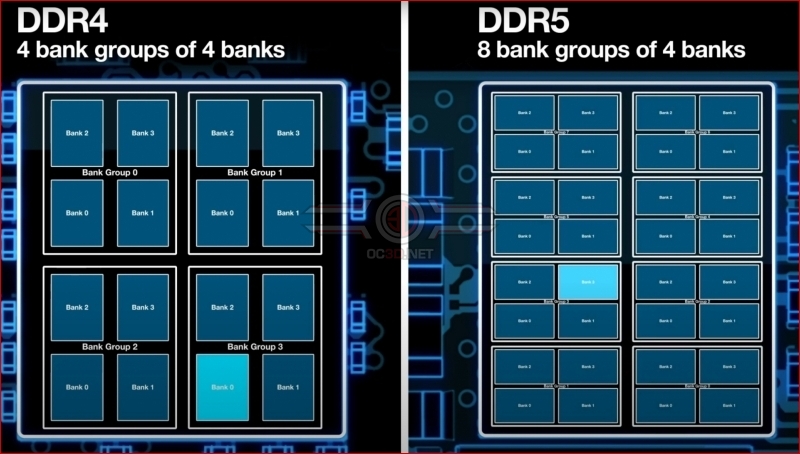 With DDR4, the memory locks each rank of memory during a refresh, making much of the memory unusable for a limited time. With DDR5, 1 bank of memory can be refreshed per memory group, which means that the other three banks can operate as normal while another is refreshing.

In effect, this allows 75% of the memory banks to operate during bank refreshes, delivering users a considerable performance boost. This will help lower DDR5's effective memory latency in many scenarios and help deliver users more effective memory bandwidth.

DDR5 will offer users two independent 40-bit channels per DIMM to enable 2x as many concurrent operations as DDR4. This alteration will help users of DDR5 get peak performance levels from their memory at all times by parallelising this aspect of DDR5. 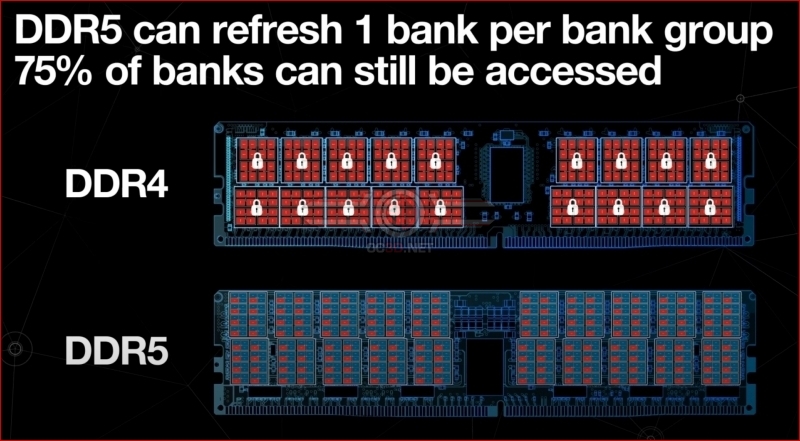 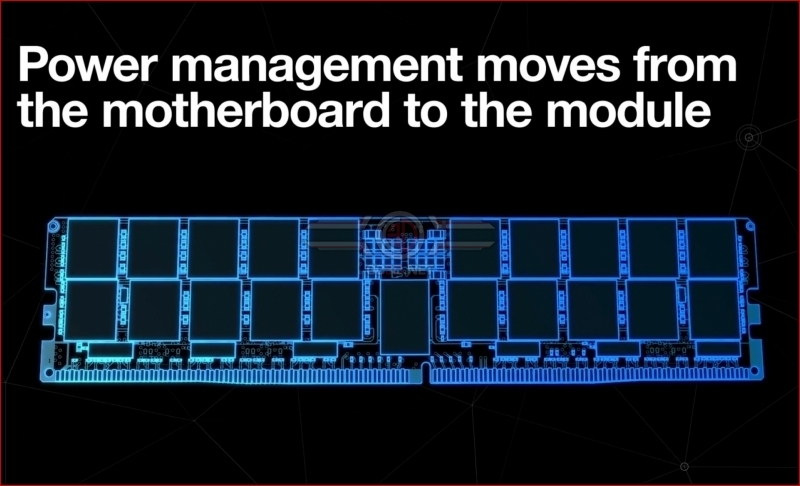 DDR5 isn't just about increasing memory bandwidth, its about getting more effective bandwidth out of every cycle. In Micron's testing, its DDR5 memory can offer users a 36% increase in bandwidth over DDR4 when both modules are operating at 3200 MT/s. Without a speed increase, DDR5 can offer 36% more performance. 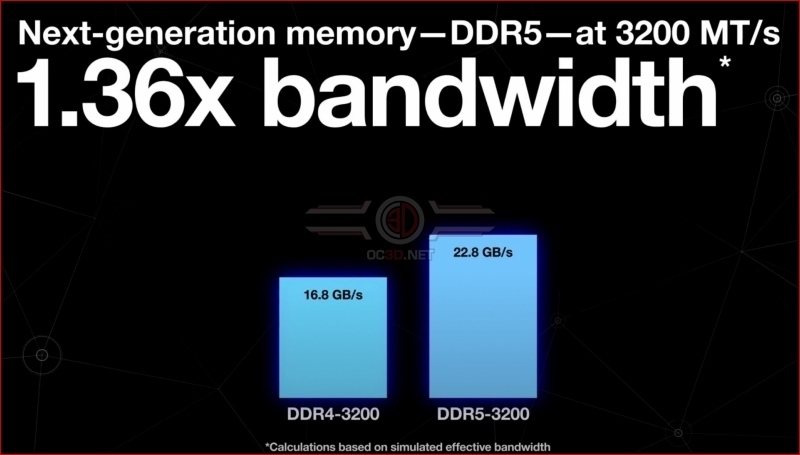 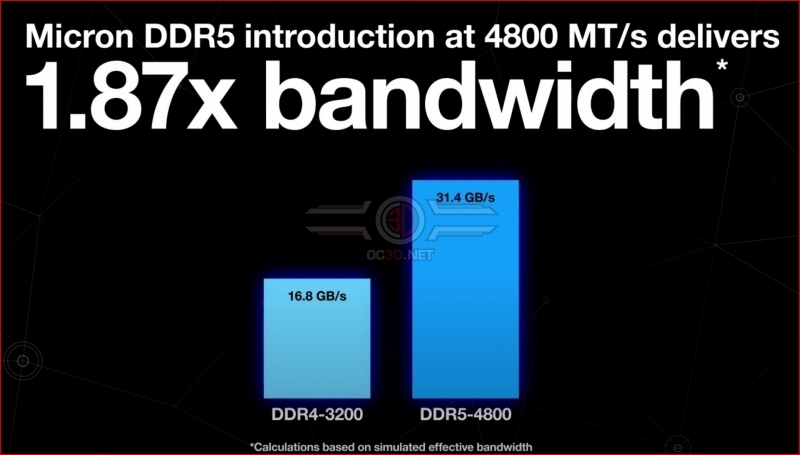 Micron wants to push the DRAM market to DDR5 as fast as possible, and that is great news for PC users. DDR5 offers the potential to increase DRAM performance significantly, and that will introduce a lot of exciting options for software developers.

You can join the discussion on Micron's push for DDR5 memory adoption on the OC3D Forums.

2nd to last paragraph though I believe it was meant to say "release DDR5 memory modules" but you said ddr4.Quote

WYP
Quote:
Thanks. The typo has been fixed. It's good that DDR5 isn't just DDR4 with higher clocks. It will be interesting to see what gets done with the extra bandwidth over time.Quote

NeverBackDown
I think it'll have a bigger effect on Ryzen CPU/APUs if the efficiency goes down which means lower latencies from the memory itself and more bandwidth/cycle.

Outside of that it's hard to tell what else it would be good for at the moment as you said.


One thing I hope happens is cheaper memory sooner rather than later as well as higher speeds closer to it's launch instead of the normal massive speed increases a year or two down the line.Quote

Kleptobot
The shift to on module power management is interesting, i wonder if its going to tie in with the new atx standard for PSUsQuote
Reply