At DesignCon 2018, Micron presented a research paper titled "16Gb/s and Beyond with SingleEnded I/O in High-Performance Graphics Memory", highlighting the potential of GDDR6 memory as a cost-effective high-bandwidth memory solution.

When compared to competing high-end memory solutions like HBM2, GDDR6 offers manufacturers with a great deal of simplicity, requiring not interposer solution or Through-Silicon-Vias (TSV). GDDR6 gives end-users with the familiarity of GDDR5, bringing the industry and easier upgrade path with a proven design scheme. While HBM2 offers other advantages, GDDR6 is a lot less risky from a design perspective.

Micron's paper, which is available to read here, discusses the scalability of GDDR6, with the group achieving speeds of 16.5Gbps. Beyond that, there is a little misinformation that needs to be addressed, especially regarding reported transfer speeds of 20Gbps.

Below is the vital passage of Micron's paper regarding the scalability of their GDDR6 memory beyond 16.5Gbps, where Micron states several times that they bypassed their memory array and achieved GDDR6 I/O speeds of 20Gbps. Micron's I/O only memory testing isn't the same as overclocking their GDDR6 memory to offer 20Gbps speeds. Anyone stating otherwise is overstating the overclockability of Micron's early GDDR6 memory.

While the preceding results demonstrate full DRAM functionality up to as high as 16.5Gb/s, it is possible for the overall performance of an architecture to be capped by timing limitations in the memory array itself. To determine if this GDDR6 interface could extend beyond the 16.5Gb/s range, the device was placed into a mode of operation which exercises only the I/O while bypassing the memory array.

The oscilloscope measurement presented in Fig.15 (below) confirms that when bypassing the memory array, and with a small, but helpful, boost in I/O supply voltage, it is possible to push Micron Technology, Inc.’s GDDR6 I/O as high as 20Gb/s. 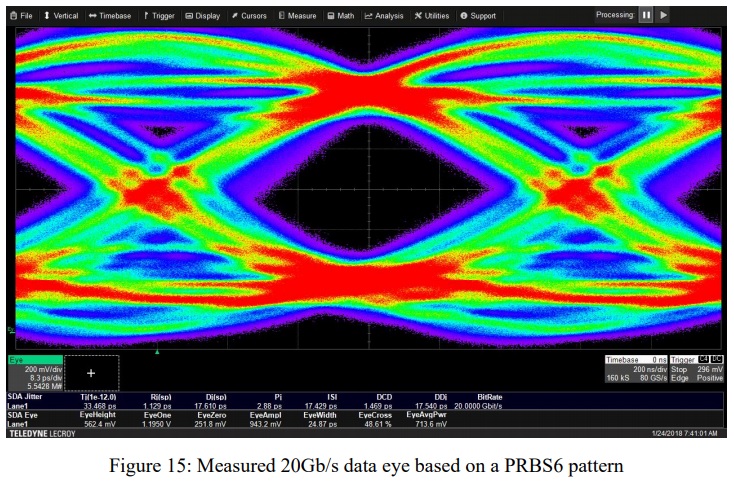 While the claims that Micron's GDDR6 memory is easily overclockable to 20Gbps with a "small, but helpful, boost in I/O voltage," are false, though it is worth noting that Samsung has already announced 18Gbps GDDR6 memory.

It is possible that GDDR6 memory could reach transfer speeds of 20Gbps in time with full stability, though for now, it seems likely that early GDDR6-based products will have memory speeds of between 14Gbps and 16Gbps.

You can join the discussion on Micron achieving 20Gbps I/O speeds with their GDDR6 memory on the OC3D Forums.

NeverBackDown
Well it probably won't change performance much. If anything Vega will see the most benefit as it's memory starved apparentlyQuote

Dicehunter
I'm thinking that the xx80 will get 16Gbps memory and the next Titan and xx80 Ti will get the faster 20Gbps memory.Quote

NeverBackDown
I doubt we will see 20Gbps anytime this year in the consumer market.Quote

WYP
Quote:
Quote:
To be 100% clear, 20Gbps is what the interface is capable of, not the memory itself (at least right now).Quote

NeverBackDown
I know I was just replying to DiceQuote
Reply