Micron is set to release GDDR6 memory in 2017, offering 2x the bandwidth of GDDR5 and up to 20% more efficient. This gives GDDR6 memory bandwidth of 16Gbps, which could, in theory, allow a GPU like the GTX 1080 to offer memory bandwidth of 512Gbps, which is as much as the HBM powered R9 Fury X.
Right now the GDDR5X memory used in the GTX 1080 offers speeds of 10Gbps, with higher end GDDR5X offering speeds of 12Gbps. This gives GDDR6 a significant boost over even GDDR5X, allowing the GDDR memory standard to rival even HBM memory in terms of pure bandwidth. HBM and HBM2 memory will still offer power savings when compared to GDDR5 and GDDR6 memory, though this memory will require an expensive interposer to directly connect the memory to a GPU.
Micron expects GDDR6 to be the world's leading memory type in 2020, offering the same relative ease of use as the existing GDDR5 and GDDR5X memory standards, which should help with the adoption of this new memory standard over HBM. 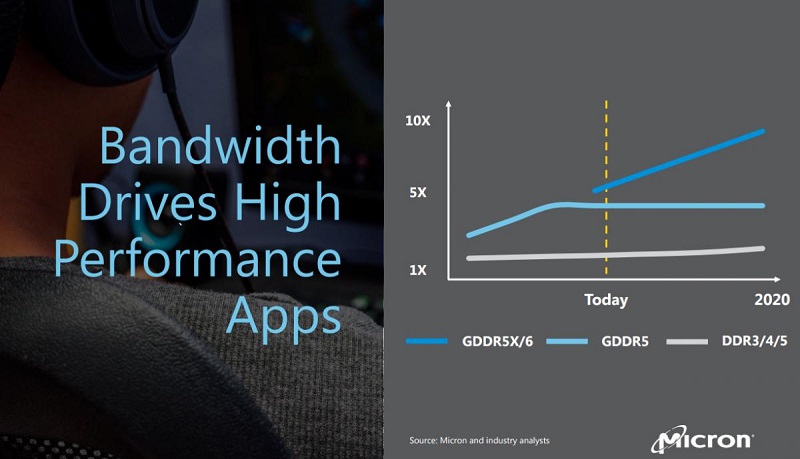 With GDDR6 releasing in late 2017 it is expected that we will be seeing products using the new memory standard in early-mid 2018. GDDR6 is expected to be used first in next-generation graphics products, though at this time it is unknown how it will compete with HBM2 in the high-end of the GPU market.

It is likely that HBM2 will continue to be used in high-end GPU products well into the future, with GDDR6 replacing the GDDR5 memory used in mid-range or low-end GPUs.

You can join the discussion on Micron's GDDR6 memory on the OC3D Forums.

NeverBackDown
Not impressed. They once said 5X could hit nearly 16 as well and easily 14. Not much of an improvement.
Also still the issue of consuming more power than HBM, and even with HBMs interposer, it still takes up less space than a GDDR layout. Not to forget that HBM/2 standard speed is 512GB/s, when in fact it is capable of 1TB/s. GDDR just seems like it's dying now.
By the time it's mainstream, HBM2 will be pretty cheap and probably 3 on the way.

Although good to them on trying. Always nice to have options, just don't think this will be the highest performance option availableQuote

Dawelio
Quote:
Really liked this post, probably one of your best ones and I agree that what you're saying sounds very reasonable and true.Quote
Reply