Products based on Intel's new Optane memory have been released, but today consumers are merely scratching the surface of the usefulness of this new memory technology. Yes, Optane can act as a hyper-accelerator for HDDs, or as an ultra-fast replacement for even NVMe SSDs, one of the biggest draws for 3D XPOINT/Optane has always been as a DRAM replacement.

Today a 32GB XPOINT/Optane system accelerator is priced at £80, which is gives this new memory type a much lower cost/GB than DRAM and open up the potential to create servers with larger banks of memory while at the same time allowing the memory to be used as dedicated storage. This brings dedicated storage closer to the CPU than ever before and will allow servers to more easily work with increasingly large datasets with ease.

Yes, XPOINT is not as fast as DRAM, but there are times where quantity/capacity and data volatility/stability are more important than sheer speed.

Optane DIMMs will be called "Intel persistent memory" and is currently set to release sometime in 2018 with a new series of Xeon processors called "Cascade Lake" giving Intel server users some unique benefits/opportunities. 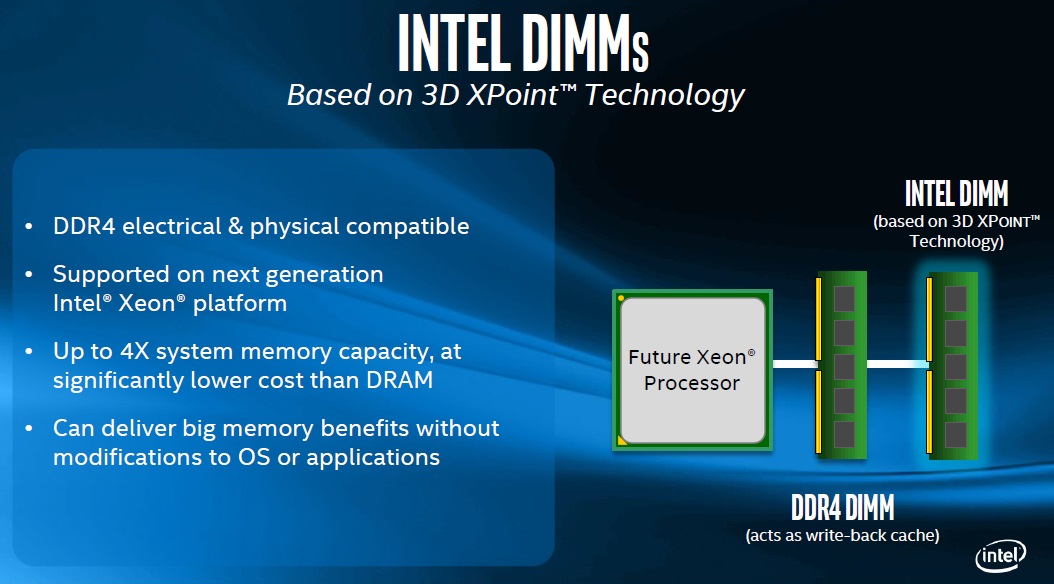 Optane memory is a no-brainer when users require fast access to large banks of data, though it remains to be seen how well Optane will function as a full on replacement for DRAM.

Using DRAM as a non-volatile storage medium has the potential to change the way that future computers are architected, removing the barrier between RAM and system storage to create a whole new era of computing possibilities.

You can join the discussion on Intel's Optane memory on the OC3D Forums.