Up to 512GB of Optane per DIMM

When compared to DDR4, Optane memory offers higher latencies and decreased levels of bandwidth per DIMM, though this can be somewhat mitigated thanks to Cascade Lake's support for hybrid DRAM/Optane memory setups. Optane memory also offers data integrity benefits thanks to its non-volatile nature, allowing data to be stored on each DIMM even while servers are powered off.

What Optane offers is DIMM-based storage in a more affordable form, acting as a mid-way point between DRAM and NAND in terms of bandwidth, latency and performance.

Unfortunately, for Intel, their Optane DC series memory DIMMs are arriving at a time where DRAM pricing is seeing significant decreases, a factor that cuts into the value proposition that's offered by Optane memory. Even so, Optane DC DIMMs will offer users more value for money in specific workloads, especially for those where memory capacity matters more than performance per DIMM.

Optane DC memory support is available on Cascade Lake thanks to Intel's updated memory controller, which means that older Xeon processors won't support Optane DIMMs. Beyond that, Optane DIMMs will not be supported by AMD processors, securing Intel an advantage against their rival, one which may prove critical as AMD launch of 7nm EPYC processors approaches.

Intel's Optane memory DIMMs use a DRAM-like memory controller and will be managed differently than DRAM due to latency and performance considerations. This is the primary reason why Optane DC DIMMs are not supported outside of Cascade Lake Xeon hardware.

In servers which work through large data sets, Optane will be extremely useful, offering larger banks of DIMM-based memory which will allow systems to keep their workloads within DIMM-based memory more often and avoid the performance bottlenecks that could be caused by moving to SSD or HDD-based storage. 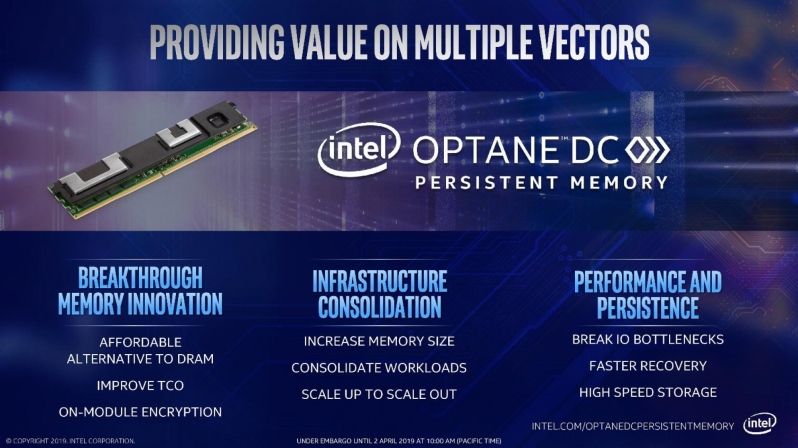 Moving forward, Optane memory has the potential to create a new category of devices, one where DRAM and storage could theoretically be the same pool of memory, allowing infrequently accessed data to be loaded just as quickly as data in main memory. Moving forward, it will be exciting to see what Intel offers with 2nd and 3rd Generation Optane/Xpoint memory, as closer to DRAM performance could be a game changer for the PC marketplace.

You can join the discussion on Intel's Optane DC persistent memory technology on the OC3D Forums.