Taking Optane closer to the CPU

Intel has announced the availability of their latest Optane memory technology in a DIMM form factor, taking Intel's X-Point memory closer to the CPU than ever before.

This memory should not be confused with Intel's existing Optane storage drives, as while the underlying memory is the same, these new modules are designed for a very different purpose. Intel's Optane DC persistent memory modules are designed to be used as an extension and accelerator for DRAM.

For starter, Intel's Optane DIMMs will offer capacities of 128GB, 256GB and 512GB per DIMM, offering storage densities that are in a different league than today's DDR4 DRAM.

The move to a DIMM form factor has also allowed Intel to cut down the latency of their Optane memory significantly, making it a lot more viable as a DRAM replacement or extension, as PCIe-based solutions have several more steps to take before accessing CPU resources. Moving Optane onto a DIMM bring Optane as close to the CPU as DDR4 DRAM, giving it the characteristics it needs to accelerate large data-driven workloads.

Intel wants Optane to sit as a storage medium that comes after DRAM and before system memory, with a system's most important data moving to DRAM while less sensitive data is stored in Optane. When the information on Optane is required, systems can access it exceptionally quickly thanks to its close to the CPU DIMM design, offering significant latency and throughput benefits over an equivalent Optane-based PCIe SSD storage medium.

Intel is currently sampling their Optane DC DIMMs to customers and has showcased preview systems with 192GB of DRAM and 1TB of Optane persistent memory. Broader availability for Intel's Optane DC DIMMs is expected in early 2019. 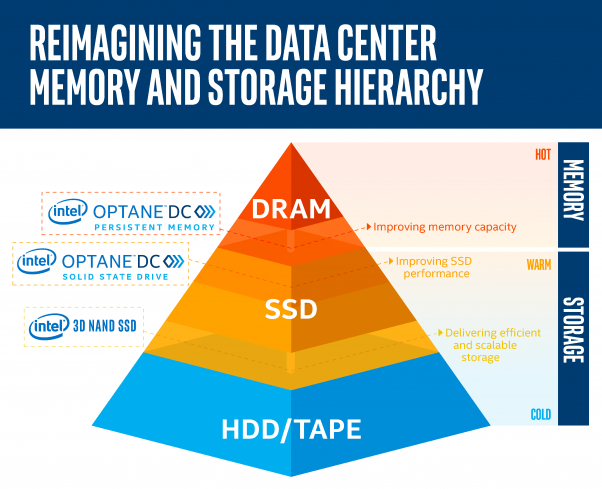 Intel's Optane DC memory has the potential to be transformative for specific applications, or at a minimum allow server manufacturers to create systems with vast banks of memory without the extremely high costs of using DDR DRAM exclusively.

The problem here is that the hardware ecosystem is in its early days, Optane memory is a relatively unproven memory type, and the software ecosystems will need to adapt to these hardware changes.

You can join the discussion on Intel's new Optane DC persistent memory DIMMs on the OC3D Forums.

CCISolitude
For some server tasks, maybe.

Better question (from my point of view at least) is will it be useful for gamers/HEDT enthusiasts?Quote

Chopper3
This has been under NDA to large server buyers for quite some time now, finally we're getting close to what Optane was designed for - NoSQL database storage, works a treat

demonking
Quote:
Only those with very, very deep pockets. Can't see this making to consumer grade motherboards for a while.

I want to know if you would use existing dimms to install these or they would have their own slots? If it was existing then maybe it'll make its way to support consumer motherboards sooner as it should be as simple as chipset and bios work. If its separate, top end servers for a few years, mainstream server boards for a year or 2 and then we'd get it, Maybe... if its financially viable.Quote
Reply