Gagabyte are entering the DRAM market

Computex is set to start next week, giving PC builders and gamers an opportunity to take a glimpse tomorrow's hardware, with every major PC gaming brand participating in the event.

AORUS, Gigabyte's Gaming Sub-brand, is set to expand significantly at this event, with coolaler reporting that branded power supplies, cases and accessories will be showcased at the event. Aorus Gaming RGB memory is also set to be showcased at this event, offering support for the company's RGB Fusion control system and ship in both memory DIMM and Demo "Dummy" DIMM versions.

The image below states that Gigabyte's Aorus RGB memory will ship in 2x8GB 3200MHz kits, which will ship with two additional dummy modules to fill up the empty DDR4 memory slots on most ATX-sized motherboards. At this time it is unknown if these modules will support RGB control software outside of Gigabyte's RGB Fusion software suite. 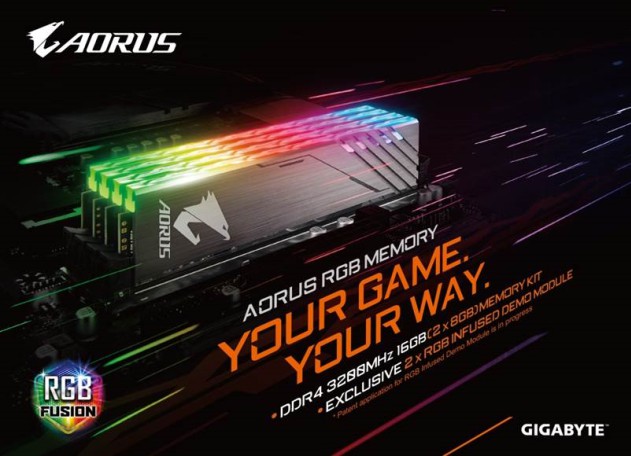 Gigabyte's Aorus Gaming Corner will be located on in a VIP room on the 36th floor of Taipei 101, where Gigabyte plans to showcase equipment which is designed for eSports players and other hardcore gamers. At this location Gigabyte also plans to showcase what is possible using their RGB Fusion software.

You can join the discussion on Gigabyte's Aorus RGB DDR4 memory on the OC3D Forums.

Dawelio
That Aorus logo truly ruins it. Looks like a bird with a broken bottom jaw.Quote

WYP
Quote:
Gigabyte should make an official announcement at Computex. Pricing etc is to be confirmed (TBC).Quote

TheF34RChannel
When will we the end of RGB? I only decorate a Christmas tree once a year

NeverBackDown
I don't mind RGB. As long as it's not over the top and as bright as the sun I'm all for it
That said I don't have any rgb..Quote
Reply